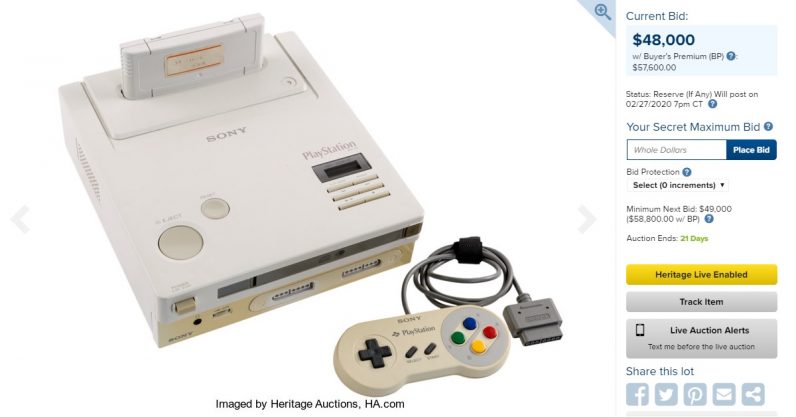 The bids are in, finally. After a good long sweat to see what the final number would be, the Nintendo PlayStation has finally been sold. And the price tag is a whopper — though the buyer is probably not who you’re expecting it to be.

In case you missed it, the never-released prototype console was sold at Heritage Auctions this month. With a winning bid of $300,000 ($360,000 with the buyer’s premium), the Nintendo PlayStation is now one of the most expensive gaming items ever sold — possibly the most expensive, though there’s no definitive list anywhere. For comparison, the only item of comparable value I can think of was a sealed copy of Super Mario Bros that sold last year for $100,150.

Former owner Terry Diebold potentially missed out on a windfall — he reportedly turned down a $1.2 million offer for the console. According to Kotaku, the main reason Diebold turned down the offer was because the taxes would wipe him out. And $360,000 is nothing to sneeze at. CNN reports the buyer said of the purchase: “It’s the single most expensive thing I’ve ever bought outside of a house.”

As for who bought it — well, apparently Oculus founder Palmer Luckey didn’t succeed in getting the console. Despite his claim on Twitter to have had the highest bid, it turns out the $360k offer did not come from him.

According to Forbes, the new owner of the console is Greg McLemore, the founder of Pets.com. If you’re of a certain age, you might remember that as the site with the sockpuppet dog mascot from the late 90s, which subsequently became one of the biggest dot-com flameouts of the early 00s. McLemore has apparently been collecting video game consoles for quite some time. He says he intends to turn his 800-item collection into a museum, saying “I’m looking to not have this machine just buried in a closet somewhere.” To that end, he’ll start by displaying the console at various exhibitions, starting with the University of Southern California’s Pacific Asia Museum. The console will be part of an exhibit next year about Asian influence on the gaming industry.

Hopefully he can set up a legitimate museum, as it would allay some of my own knee-jerk, Indiana Jones-style “That belongs in a museum!” fears. This is a precious piece of gaming history, and would be frightfully easy to mishandle. I can only hope McLemore treats it with the appropriate care — and also, if/when this museum gets up and running, I humbly request to be allowed to be first in the door.