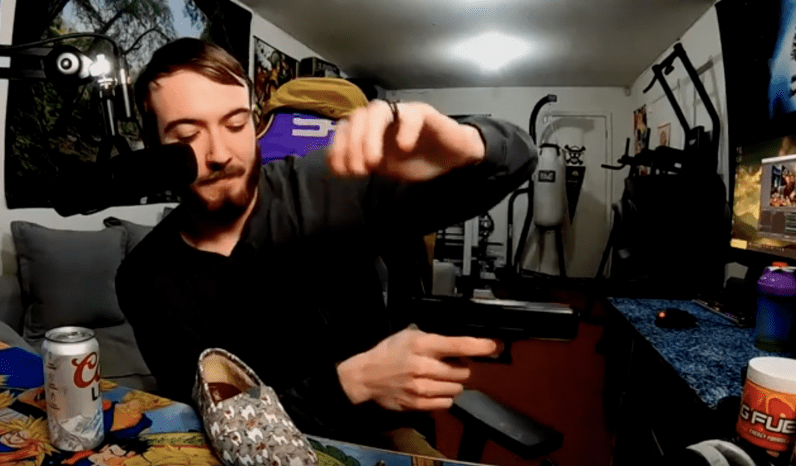 A professional streamer has been banned from Twitch and dropped from his esports organization after firing a gun into his desk during a Call of Duty stream.

“Call of Duty” trick-shot icon and former FaZe Clan member Carl Reimer pulled the gun, a pistol, during a livestream from his home last night. “Bitch say I ain’t got money,” he said, jokingly, while holding the firearm. Reimer then pulled the trigger and, to his surprise, it fired a round into his desk.

“God damn,” Reimer said. “I swear to God I just emptied the mag!”

No one was hurt in the incident, aside from a nearby container of Gfuel — a powdered energy drink marketed to gamers — which seems to have taken significant damage.

On YouTube he confessed that he was “clearly intoxicated,” which is refreshing, because being a drunk moron is always a better excuse than being a sober one. A can of Coors Light was visible on Reimer’s desk.

“I made my biggest mistake of my entire life last night, and it could ruin my life,” he said in a Twitter video. “I could have hurt somebody. I could have hurt myself. I could have hurt one of my animals. And that’s unforgivable… I’ve had that gun for two years, and all it takes is two seconds of stupid to ruin everything. To ruin somebody else, to ruin yourself. Don’t do what I did.”

Read next: Escape from Tarkov devs could have avoided the ‘no female characters’ problem

It’s unclear whether the Twitch suspension is permanent yet, though Reimer does have more than 800,000 YouTube subscribers to fall back on if it is. It’s clear though that his wallet is going to suffer. He says he “stopped making enough from YouTube to pay the bills a while ago.”

Reimer, for his part, thanked SoaR for doing “what they needed to do,” by dropping him. He’s apologized for the mistake.

“I just made such a stupid, stupid, stupid mistake,” he said. “All I can say is that I’m sorry, and I deserve everything. Every bit of backlash.”

Read next: Designers should understand users make most decisions without rational thinking