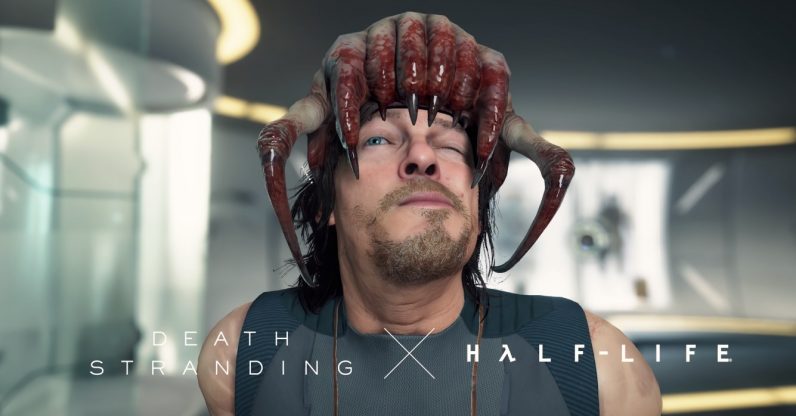 Death Stranding is coming to PC, eight months after its debut on the PS4 last year. Hideo Kojima’s beautiful oddity of a game will arrive on June 2, and it’s bringing along some strange crossover content — namely, from Valve’s Half-Life series.

The PC port will include a new photo mode, much like God of War (albeit in this case the silly facial expressions actually feel marginally closer to being in character). It’ll also support ultrawide monitors. Pre-order content includes an art book, special in-game armor, and a copy of the in-game soundtrack.

So far, so standard for a PC release of a formerly console-exclusive game, yeah? The strange thing is that, for no reason we can see, developers Kojima Productions and publisher 5o5 Games are including content from Half-Life. Seriously, it’s not like the two game series have much in common. One is a bizarre balancing simulator that places a heavy emphasis on bodily fluids, and the other is about a physicist who kills aliens with a crowbar.

And yet… I’m intrigued.

The only point of crossover we know of thus far is that protagonist Sam Bridges will be able to wear a headcrab. Also, it’s not part of the HL crossover, but Sam does look at little Gordon Freeman-ish in his glasses. That’s about it, though, and 505 isn’t giving up any more details. Though I will say, they include the Gravity Gun in game, then let me get a blank check because they can have all of my money.

I don’t know if the impending release of a Half-Life game after so long is the impetus for this otherwise unprompted show of fealty to the ultimate PC gaming franchise. There is a chance that the reason we haven’t seen much of the crossover content so far is because it’s something related to the upcoming Half-Life: Alyx. Then again, Kojima‘s kinda kooky, so for all I know this is him paying tribute to one of gaming’s most storied franchises to accrue some cred for his pet project. Who’s to say? All I know is I’m on board for it.

Death Stranding releases on Steam and the Epic Games Store. One presumes the latter will be devoid of Half-Life content.