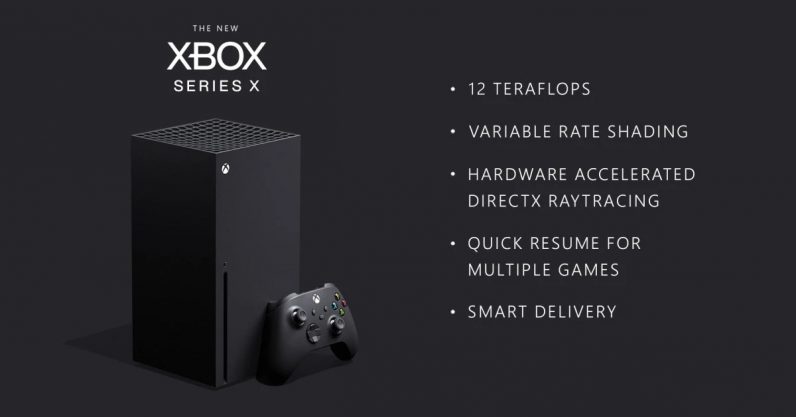 Microsoft today gave us a look at the Xbox Series X’s specs, meaning we’re finally seeing what the next-gen consoles will have under the hood. And I can’t lie: it’s looking pretty good.

12 teraflops and so much more. Discover what the next generation of gaming means to Xbox: https://t.co/WWFJ6YkHzT#PowerYourDreams pic.twitter.com/RDlWXwVF8f

According to Xbox head Phil Spencer, the XSX will have an impressive 12 teraflops of GPU performance, “twice that of an Xbox One X and more than eight times the original Xbox One.” It’ll also have hardware-accelerated ray-tracing and Variable Rate Shading (VRS), which, in short, will make the games look prettier and more realistic. Spencer also says, with the addition of SSD storage, “nearly every aspect of playing games is improved.”

In addition to the hardware, Microsoft revealed it’s bringing a few software perks to the XSX. With this, you can hold multiple games in suspended states, starting instantly where you left off. The “multiple” part is what intrigues me, since I’m typically playing several games in any given week. The company’s also giving its first-party games “Smart Delivery,” which means “you only have to purchase a title once in order to play the best available version for whichever Xbox console they choose to play on.” Third-party games can also take advantage of this, and CD Projekt Red confirmed via Twitter that its hot new title, Cyberpunk 2077, will be one that does.

Gamers should never be forced to purchase the same game twice or pay for upgrades. Owners of #Cyberpunk2077 for Xbox One will receive the Xbox Series X upgrade for free when available. https://t.co/nfkfFLj85w

Still, the proof of the hardware is in the gaming, if I may twist the idiom a little. These internals could be vicious, but they need a game of appropriate heft in order for us to really appreciate them. So far, the only one we know we’ll be getting at launch is Halo Infinite, meaning poor old Master Chief is once again going to have to carry the company’s hopes and dreams on his power-armored shoulders. In the final part of the reveal, Spencer also confirmed that the XSX will be backwards compatible with all previous generations of Xbox games, or at least those that were already available on Xbox One, so at least we know we’ll have plenty of games to play in that respect.

We’re still missing a major detail: price. Given that Sony is supposedly waiting to give the PlayStation 5 a price until after Microsoft reveals the XSX’s, this might be Microsoft’s power move. Still, it’s just as likely it’s waiting for E3 or some similar event. I’m still not ruling out the possibility that it might have two consoles, one being a lower-specced version of this for a lower price, just to justify the XSX having a hefty price tag.

Speaking of which, I’m not sure what the heck Sony is doing. Obviously one console has to be revealed before the other, but I didn’t think the XSX would preempt the PlayStation 5 on just about every reveal. Rumor has it that Sony was originally planning to reveal its console at this year’s Game Developer’s Conference, but since it’s backed out of that over coronavirus fears, there’s no telling exactly when we’ll see it. Ball’s been sitting in your court for a while now, Sony.

Read next: Everything you need to know about Honor’s just-launched 9X Pro