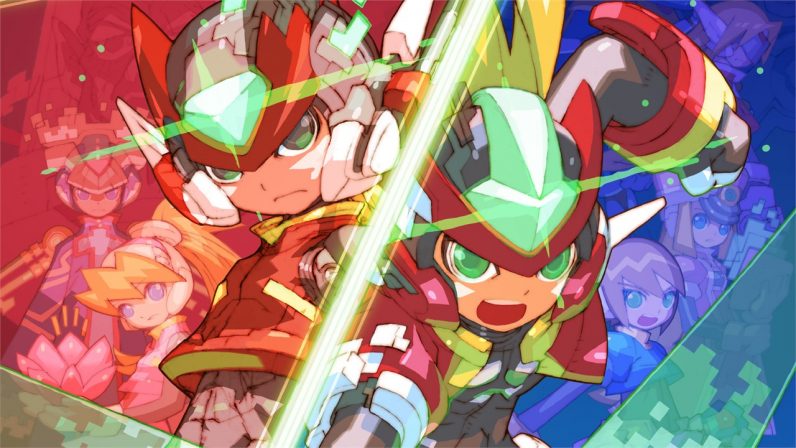 Growing up, I remember the kids my age being either way into Mario or way into Sonic, depending on whether their parents got them a Nintendo or a SEGA system. I come from a Nintendo household, which was great because Super Mario World is one of the best games of all time and every single Sonic game is bad. But there was a third platforming hero and it’s the one I’ll always love the most.

I liked the 8-bit Mega Man games on the NES fine, but I was a bit too young for their insane difficulty and it wasn’t until I got Mega Man X for the Super Nintendo back in 1994 that I became obsessed with the series. Something about the 16-bit graphics, the new moves like the wall jump and the dash, and the music spoke to me in a way few other games did.

Throughout my summers I’d replay some of my favorite entries in the X-series, but I never ‘graduated’ to the Mega Man Zero games on the GBA (and the two ZX games on the Nintendo DS after that). I owned both those systems, but I just never got around to playing with my beloved little robot guy on them.

Fortunately I’m finally getting the chance to fill this horrible gaping hole in my gaming backlog thanks to the upcoming release of the Mega Man Zero/ZX Legacy Collection on PS4, Xbox One, Switch and PC.

This collection bundles all four Zero games and the two ZX games in one neat package and adds some interesting features like auto-saving checkpoints (hallelujah), a casual difficulty, remastered audio recordings and cutscenes, image galleries, and a new ZX Chaser mode that lets you race against a human opponent.

If you haven’t played the Zero games, but have a fondness for the Mega Man series, you’re in luck with this wonderful package. The Zero games are an interesting evolution of the series, not unlike the jump from the original Mega Man games to the 16-bit X games.

Compared to their predecessors, the Zero games bring improved graphics (the GBA ones are still very pixely on a big screen, but playing them on the Switch in handheld mode was fine), new gameplay features (one big interconnected map, new moves), more cutscenes, and they are exceedingly difficult.

Seriously, it’s a good thing this collection has six games to flip between, because you’ll be getting stuck on intense boss fights constantly. Even with the new built-in checkpoint system you’ll be banging your head on so many proverbial walls that you question your life choices more than regularly while playing these games.

One annoying thing about the later two games in the package, ZX and ZX Advent, is that they’re made for the dual screen Nintendo DS, which means they constantly have a sub screen eating up a part of your view. You get some options as to how you want to position the second display, but it’ll always be eating up a part of your precious screen real estate, even though it’s not used that often.

It would’ve been cool if Capcom found a way to integrate the second screen more elegantly, but maybe that’s asking too much from this otherwise fine collection.

I would recommend you get the Mega Man Zero/ZX Legacy Collection on Nintendo Switch, because these games are perfect for the console’s handheld mode. Playing GBA games on a television just isn’t the ideal experience. It’s still fine and totally playable, so if you’re a Mega Man fan without a Switch you’ll be fine playing this on other platforms. But if you’re like me, you’ll probably be more than happy that you get to play these games on a modern console.

The Mega Man Zero/ZX Legacy Collection comes out for PS4, Xbox One, Nintendo Switch, and PC on February 25th for $29.99.

Read next: This Amazon parody dating site is hilarious... and also kind of creepy