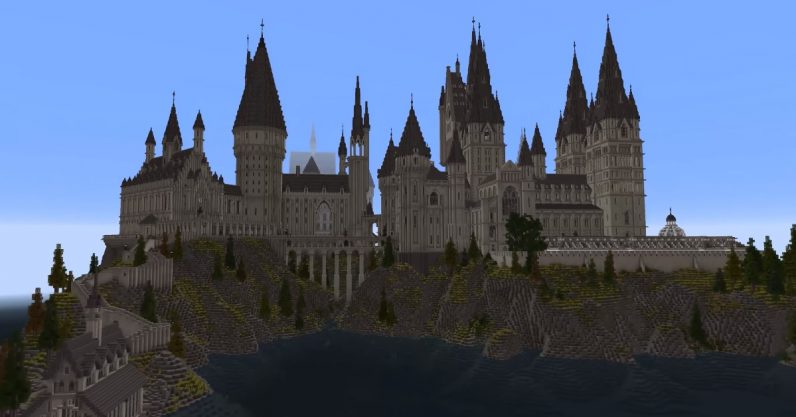 A Minecraft modding group today released the trailer for its School of Witchcraft and Wizardry, a map that recreates many of the main locations from the Harry Potter series, including, as the name suggests, Hogwarts. So… who else suddenly wants to reinstall Minecraft?

The group, called the Floo Network, claims their mod will deliver the complete magical experience, including the wizardry lessons, quests, Quidditch, and encounters with familiar characters. You can also visit major locations away from school, including Diagon Alley and Platform 9 & 3/4. The spells range from teleportation, light beams, and Patronuses to ward off dementors. Given that you can also scavenge for resources such as health potions and money — yeah, this is a full-blown Harry Potter RPG.

Naturally it’s not exactly called “Hogwarts” in the trailer — I’m sure that’d be infringing on some sort of copyright. But it looks exactly like the film version of Hogwarts, down to the Chamber of Secrets. It’s an impressive accomplishment. According to an IGN interview with the lead developer, the team even visited some of the filming locations to get the look correct. The current version of the map is an evolved form of one the Floo Network released several years ago but wasn’t satisfied with.

I’m used to seeing cool. creative things done in Minecraft, but this is absolutely wild and I must have it. I’ve seen similar Hogwarts recreations done in Garry’s Mod, but nothing so far that actually makes me nod my head and say “Yep, that’s Hogwarts.” The Floo Network mod definitely looks the part, though it remains to be seen if it can deliver on its lofty promise.

For all its effect on pop culture, and how ubiquitous things like “sorting” into Hogwarts houses are, we’ve yet to have a wands-out, full-on game that recreates the Hogwarts experience for anyone who isn’t Harry Potter — unless you count the Hogwarts Mystery mobile game, which I frankly don’t. I refuse to believe Hogwarts has that many microtransactions. Some parts of the trailer, though, show shades of influence from games that were based on Harry’s story, such as the puzzles and spell challenges.

The modders say that, if you include the time devoted to their previous version, this current iteration of Minecraft‘s School of Witchcraft and Wizardry has taken seven years to build, which is a level of devotion I can barely fathom. The map will be free, but the team invites fans to help support the project via Patreon.

According to the Floo Network, they hope to release the mod before the end of the month.