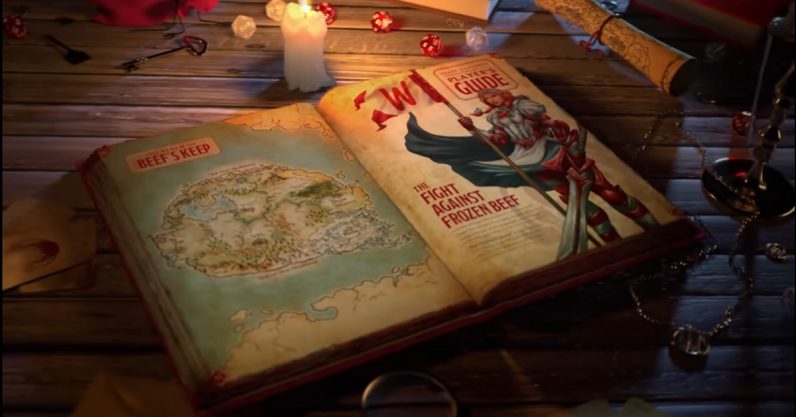 Here I thought dating Colonel Sanders was the strangest gaming-related thing I’d do this year. But now another fast food company has jumped on this curiously specific bandwagon: Wendy’s is making its own tabletop RPG called Feast of Legends.

You play a hero of Freshtovia, a nation of peaceful beef-eaters, ruled by the red-headed Queen Wendy, the “Clapback Queen… first of her name, breaker of fast food chains, defender of all things fresh, never frozen.” Your opposition is the “Ice Jester,” which I’m assuming is a thinly-veiled jab at McDonald’s, and their forces of frozen meat products.

Non-frozen this, non-frozen that — not to be overly critical, but Wendy’s really does have one string to its bow, doesn’t it? But whatever, I’ve played games with flimsier premises (*ahem* such as the opportunity to get under the Colonel’s apron).

Don’t mistake me, though: this is a full-on RPG with a massive rule book, character sheets, and a campaign to follow. I downloaded the PDF thinking it was a joke, but it’s dead serious despite the humorous trappings — the darned thing is 97 pages long and the campaign has five chapters to it. We could get a good game going with these materials.

The game map also includes nods to Wendy’s other competition, including “Lake John Silver,” “Temple of Panda,” and “Twin Cities of Carl” (dare I surmise one of them is called “Junior?”). I’m curious if “Creepingvale” is intended to be a reference to Burger King, since it fights alongside the “United Clown Nations” as Freshtovia’s opponents. Cthulhu help me, but I can almost imagine a shared universe Horde/Alliance-style faction war between the different nations. And now I’ve just given them all ideas, haven’t I?

Yes, it’s a marketing tactic — and that’s what makes it so fascinating. There’s not much I would put past the canny brainstorming of a marketing executive for a fast food company, and even I think this is bizarre. Not bizarre in a bad way — it’s just weird to google “Tabletop RPG” and have anything related to Wendy’s come up.

But heck, I’ll play it. If anyone wants to join me, you can find out more about the game here.