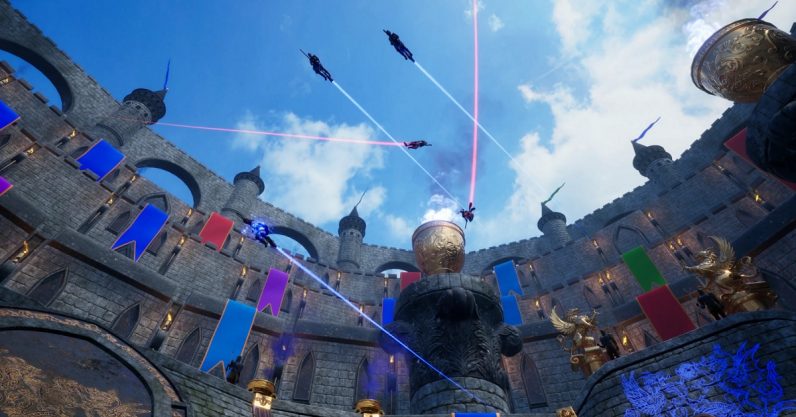 A game called Broomstick League surfaced this week, and what in the name of Harry Potter is this extraordinary Quidditch game and where can I get five of it?

Okay, it’s not Quidditch, not really. Broomstick League is developed by Virtual Basement and published by Blue Isle — there’s no relation to anything Warner Bros, so any mention of Quidditch would no doubt be copyright infringement. But you and I are free to draw the parallels on our own. It’s a game in which two teams of wand-carrying people on broomsticks compete in massive stadiums by throwing balls into hoops, so it’s hardly a reach.

To be fair, the game depicted in the trailers isn’t exactly like Quidditch. For starters, there are 1-4 players per side, rather than seven. There appears to be only one ball involved, not four. It looks a lot like Rocket League, only for the Potter-loving generation that followed the children of the Hot Wheels age.

The game is multiplayer, as you’d expect, and the developers tout the variety of matches on the game’s Steam page:

Equipped with a broomstick and wand, players must hone their flying skills and use magic to dodge enemies, defend their goal and make awe inspiring plays. Armed with the blast spell that knocks the ball out of your opponent’s hands, and the blink spell which teleports players to create goal scoring opportunities, there are endless combinations of plays with no two matches being the same.

You’ll also have the ability to customize your player in a number of different ways, and apparently we’ll also have taunts and dances (the question of how one dances while mounted to a broom has heretofore gone unanswered).

I was actually a big fan of the Quidditch World Cup game that came out in 2003 (then again, I was a teenaged Potterhead — I would have been a fan of crystal meth if it’d carried the HP branding). It was pretty janky and I remember the difficulty curve hitting me like a freight train, but having three dimensions of gameplay to work with was fun, if nothing else. Even Rocket League is pretty bound to surfaces, but broomsticks (at least, those of the magical variety) have no such restrictions. So even with the Potter serial numbers filed off, this still looks like a barrel of monkeys.

According to the Steam page, Broomstick League launches sometime next year.