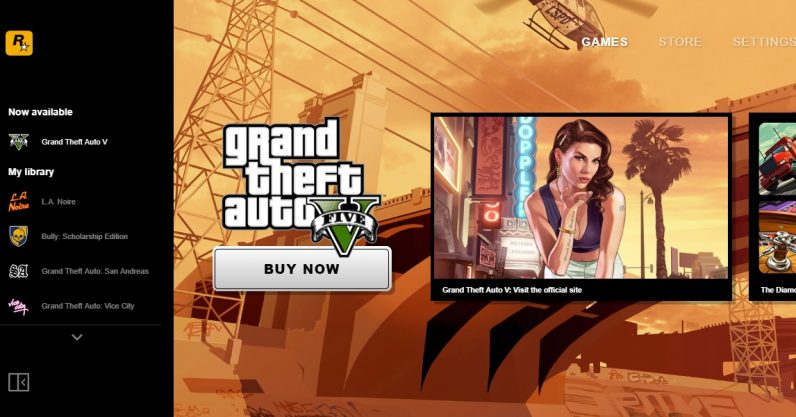 Rockstar this week joined the ranks of game publishers who have launched their own PC game libraries. The Rockstar Games Launcher is now available for Windows users… and hopefully the sign of a new release to come.

The launcher, according to Rockstar Games, functions as a combination storefront and collection for already-owned Rockstar games. Supposedly it allows you to access any games you already own, both those purchased from other digital stores and those on physical discs. It also supports cloud saves and automatic game updates. It’s a perfectly acceptable launcher, but that still doesn’t explain its existence.

Other than following the leader, it’s hard to see Rockstar’s reasoning behind such a launcher. It isn’t Ubisoft, which releases a new game roughly every harvest moon; nor is it EA or Activision Blizzard, which maintain large multiplayer communities. I’m quite glad it’s not like those other publishers, but that still doesn’t spell out what purpose this launcher serves that couldn’t be fulfilled by Steam or the Epic Store.

The trouble is, the Launcher is now mandatory for playing Rockstar games on PC. Ars Technica reports being unable to launch GTA V without it after having it installed. So that’s fun.

Of course, if you’ve been a student of Rockstar’s recent patterns of behavior, there’s an extra layer of irony here. Rockstar has, at least with regards to its most recent games, treated its PC releases as much-delayed afterthought. That’s not to say the games that are on PC are bad — quite the contrary. I quite enjoy seeing a good GTA PC mod every now and then. But they’re often released pretty far behind the console version — probably in a (successful) bid to extend sales, but still long after the console crowd will have finished the game. Heck, Rockstar still hasn’t released either of the Red Dead Redemption games on PC.

But perhaps this is a lead-in to precisely that. A RDR PC release, even if it’s just the first game, would be a pretty sweet incentive to get people to download an otherwise superfluous games launcher. With the number of games launchers available on PC, it’d take something just that spectacular. Otherwise, why would anyone bother? I’ve got about seven launchers active on any given day — why would I bother?

Oh wait, you can get a free copy of GTA: San Andreas if you download it now? Well… okay, fine.

Read next: How to watch Huawei's Mate 30 event - and what to expect