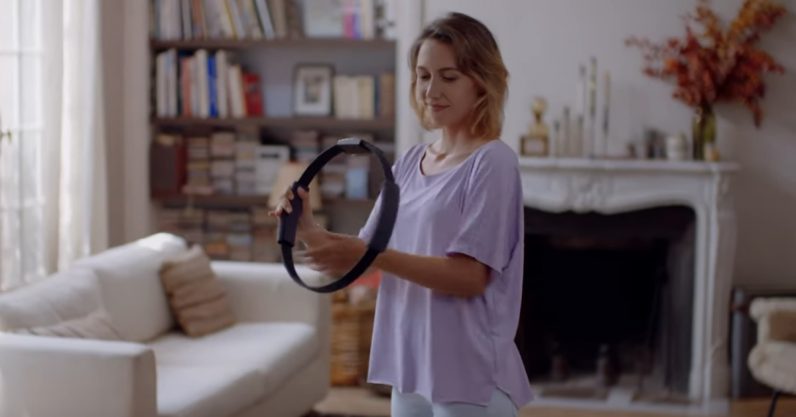 Nintendo is teasing a new innovation for the Switch and it’s… kind of weird. It’s a bizarre rubber ring and the company won’t actually say what it’s for.

So what exactly is this ring? Um… I don’t actually know. It appears to be made of rubber, given how enthusiastically the people in the video bend it. It also has slots along the side where you can fit Joy-Con. The video also shows users putting on some kind of leg band with another Joy-Con slotted into it.

All we have to go on is the trailer, given I don’t think we’ve even seen a patent for this thing before now. But the trailer makes it pretty clear this thing is fitness-oriented. The immaculately-dressed yuppies who use it in the trailer flex, stretch, and jog frantically in place while holding it, in the manner of the old Wii commercials. Far be it for me to make fun of these actors doing the honest work of selling this unknown product, but the whole video is unintentional comedy gold.

At no point do they show you the game these people are using the item with, which is a bit odd. Nintendo just had a Direct reveal — the same one where it revealed its new slate of SNES games for Switch — so it’s strange it’d reveal something new so soon after that. Presumably the game will be whatever the Switch version of Wii Fit is (pray to Cthulhu they don’t call it the “Switch Fit,” because that sounds too goofy for words). While unlikely, I’m kind of hoping whatever-this-is is compatible with the upcoming Mario & Sonic at the Olympic Games Tokyo 2020.

To be frank, my only objection to it is that it looks bizarre and a little cumbersome. Still, Nintendo marches to the beat of a very different drummer. Anything that looks weird or against the grain by conventional metrics is almost guaranteed to make the Big N money hand over fist. The Switch is already supporting the likes of Labo — I guess a big rubber hoop isn’t that hard to sell by comparison. Let’s just hope this thing doesn’t go the way of the Wii Balance Board, namely a forgotten cupboard somewhere.

According to the teaser trailer, we’ll know more on September 12.

Read next: Optoma's CinemaX P1 is a 4K UST projector with a sleek design and solid price