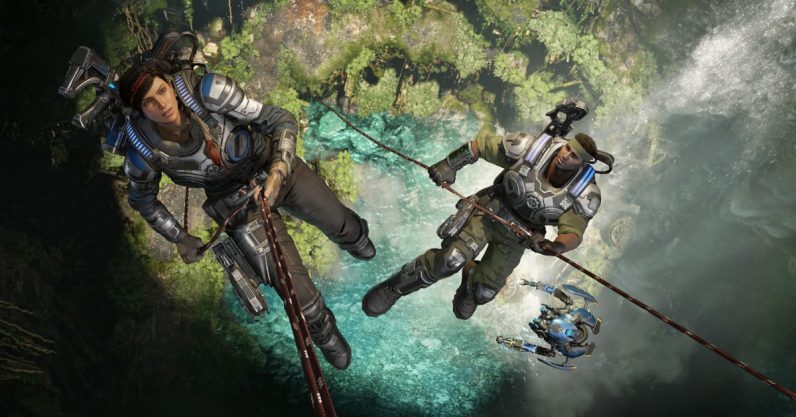 Gears 5, the latest entry in the vaunted Gears of War series, is gearing up for release on Xbox One and PC. I’ve had the chance to spend several hours with the main campaign, and I’ve noticed that, while it’s overall an exceptional game, there is one big caveat I feel needs pointing out.

I won’t tell you too much about the story, because it’s something that most people will no doubt want to experience for themselves — but I will tell you it is prime melodrama. This is a thick hamburger of a game: not the most refined creation, perhaps, but it’s really damned juicy. This story is darned good… when it actually knows who the protagonist is. The first act of this five-act game stars Gears 4‘s JD Fenix, before abruptly switching gears (literally) to relative newcomer Kait Diaz.

Without spoiling why that’s the case, I will say it’s about as abrupt in game as it is in writing. I sat there for a moment wondering if I’d missed something — turned over the proverbial two pages in the script. While the game cobbles together a reason for the viewpoint to shift to Kait, it does so by completely shafting JD as a character. I get that Kait’s the one with an open character arc, therefore it makes sense for her to be the main character this time around — but there’s no reason it shouldn’t have been her story from the very first chapter.

I’m not going to waste time pontificating about the gameplay, because if you have even a passing familiarity with Gears of War, you already know how it plays. You shoot chunky guns from behind chest-high walls until everything explodes into gore. It’s solid, gratifying, and pretty much exactly what you know to expect from a Gears game.

But there’s one addition to the formula that I feel needs discussing, if only because it comes across as experimental and I’d be remiss if I didn’t report the results. In Gears 5, developers The Coalition have added open world gameplay — specifically, two large sandbox maps that dwarf the series’ usual linear hallways.

That would be great, but there’s one problem with these maps: they’re empty.

When you’re navigating the open maps, you have the option of stopping at any time to explore. But with the exception of a few tiny blips on the radar, there’s no reason to. And even those spots where you can stop frequently yield only a few scraps of material. There are no enemies to fight, and the places where you can explore are scattered around the map pretty randomly and without much direction. There are sidequests dotted here and there, but they’re frequently resolved by either “pick up thing” or “shoot thing,” and I was getting plenty of both activities already.

I’m strongly reminded of the Mad Max game that came out a few years ago, and how tedious its empty wasteland became — but at least that game‘s vehicle was great fun to drive. Gears 5’s skiff is nowhere near as enjoyable — though I will say it’s hilarious that Kait, the only party member who doesn’t have steroidal hamshanks in place of biceps, is the one who has to wrangle the paraglider to drive the thing. What I wouldn’t give to force the meaty manbricks who hitch a ride to chauffeur me around for once, dang it.

And if you ever do stop at a landmark to strip it for parts, you’re funneled into the series’ signature hallways, and it’s only a matter of time before you get to the familiar chest-high walls. Then the enemy Swarm pops out of literally nowhere to fight you, because the script says they must. There’s no good in-game reason for them to be in the same places you are — it’s not like you encounter them just roaming around the map. They pop out of thin air to give your characters something to do and vanish just as quickly.

That’s not a good open world. I’m not saying the game has to be filled with enemy squads or random encounters — it ain’t Skyrim, thank goodness. But this kind of addition to a series that’s never had it before needs to be more exciting to justify itself, and I barely made it halfway across the first open map before I was over it.

I don’t dislike Gears 5. When it sticks to the third-person linear shooting gallery gameplay the series has already polished to a diamond sheen, it’s a goddamned blast to play. I’m also not saying The Coalition can’t do open world gameplay, but it’s definitely something that requires getting used to. And this game is clearly not comfortable having so much room to maneuver.

Gears 5 launches worldwide on September 10. You can buy the Xbox One version from Amazon for $59.99. It’s also available on the Microsoft Store and Steam on PC. If you own an Xbox Game Pass Ultimate subscription, you can download it on September 6.

Read next: Samsung's Galaxy Fold available in Korea September 6, the US in 'weeks'