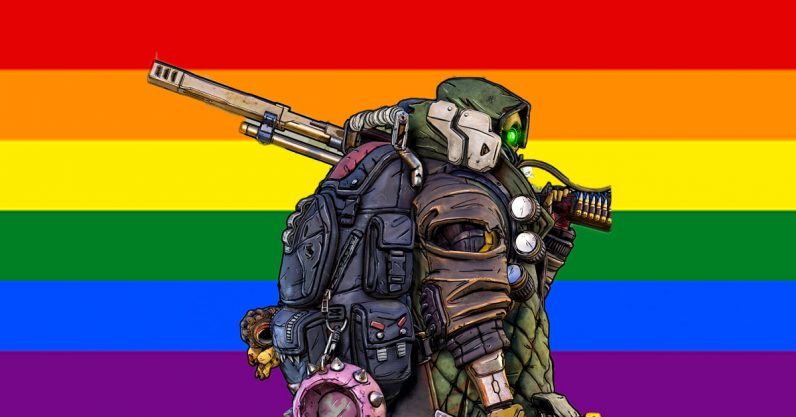 A playable main character from the upcoming hybrid RPG/shooter Borderlands 3, The Beastmaster FL4K, will be a robot that identifies as non-binary and uses they/them pronouns. This may be the closest we’ve come to getting a playable, canonically transgender protagonist in a AAA video game – excuse me while I do a happy dance.

While 2K hasn’t officially said the character represents the transgender community, it’s been revealed that FL4K is on a personal journey to discover their identity, they were shown off in the same colors in in their announcement video as the Trans Pride flag, and they have the numbers one and zero crossed out in a badge on their outfit.

And let’s not be coy here: 2K is among the most queer-friendly developers out there. I’ll eat my hat if someone who worked on the game doesn’t eventually go on the record saying that FL4K was purposely designed to be an allegory for the transgender and/or non-binary human struggle.

Borderlands 3 co-writer Sam Winkler cleared up a bit about FL4K on Twitter:

I’ve had some people ask, so I wanted to confirm — FL4K the Beastmaster does use they/them pronouns! #Borderlands3

While no company is perfect, 2K has consistently aspired to be an ally to the LGBTQIA+ community. In fact, as the headline suggests, damn near everyone in the Borderlands universe falls under the LGBTQIA+ banner — at least if you assume that the number of explicitly queer characters is indicative of the fictional universe’s unmentioned citizens’ sexual identity.

This overall queerness even includes a couple of playable main characters. Remember Axton, the cute Commando you can play as in Borderlands 2? He’s bisexual. And Athena, the beautiful shield-wielding Gladiator you can main in Borderlands: The Pre-Sequel? She’s a lesbian. FL4K would bring us up to three playables if they turn out to be canonically representative of the LGBT community.

But it’s not just the opportunity to step into some bi, lesbian, or trans shoes that matters. The background characters in the Borderlands franchise paint a fabulous tapestry of inclusivity that makes the entire fictional universe feel inviting and welcome to those of us who don’t see ourselves represented in the traditionally hetero-normative world of blockbuster video games.

There’s Moxxi from the original Borderlands, a sultry character who’s unapologetically bisexual and Mister Torgue, a giant muscle-bound arms manufacturer, is canonically bi as of the Tiny Tina’s Assault on Dragon Keep DLC (but I suspect he’d probably identify as pansexual after saying he’s attracted to all of the Vault Hunters regardless of gender). Sir Hammerlock, the master hunter and consummate gentlemen from Borderlands 2, is gay and Janey Springs from Borderlands: The Pre-Sequel is Athena’s girlfriend. Even Tiny Tina is queer, she has a crush on Moxxi.

The franchise also has queer characters you never meet. At one point during the series we find out that both a gay and a lesbian couple were forced by the villains to perform experiments on their respective partners – this isn’t a gay plot, it’s just a plot that happens to have characters who are gay in it. And furthermore, several of the characters you meet who are LGBT have quests or discoverable background information that alludes to other unseen LGBT characters.

That’s not to say Borderlands is an LGBT game, but the people at 2K have made it clear that diversity and inclusivity are important to them as developers. And it should be important to everyone.

Regardless of your sexual or gender identity, people who identify as LGBTQIA+ deserve to see themselves represented in media just as much as heterosexuals do. While companies such as Bioware have pushed the envelope by giving gamers the option to explore homosexual and bisexual romances in its franchises such as Dragon Age and Mass Effect, it’s arguably more important that developers come right out and say “this character that we created is gay” and “this character is canonically bisexual” and, with any luck, someone will one day proclaim “this character is unequivocally transgender.”

But that’s seldom the case. Gamesradar’s Sam Greer pored through thousands of gaming titles and found only 179 games out of the thousands upon thousands made that had any LGTB representation at all:

Of those 179 games, only 83 have queer characters who are playable. And of those, only eight feature a main character who is pre-written as queer as opposed to them being queer as an option. Just eight.

That’s abysmal and we have to do better as a society. Everyone shrieking indignation over having homosexuality shoved in their face should consider what it would feel like if there were only eight canonically heterosexual main characters in all of gaming for you to identify with.

Borderlands 3 launches next month, I’ll see you in game.

Read next: Your hiring process is broken — here’s how to fix it