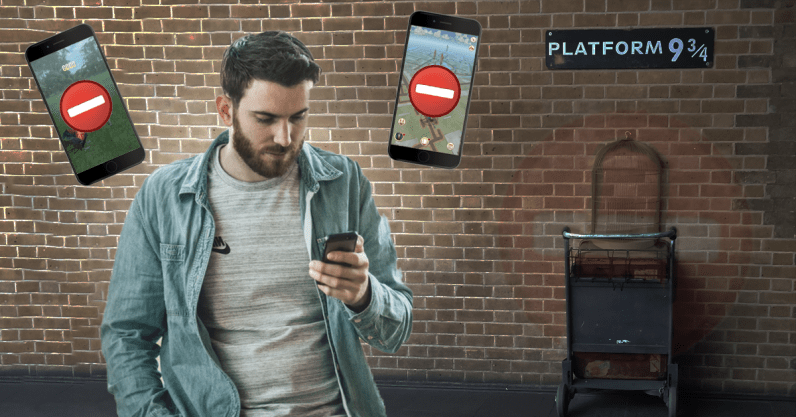 Here’s the good news: there is a Wizarding World after all. Hogwarts, hippogriffs, flying broomsticks, the Ministry of Magic, it’s all real! A most whimsical, freeing, empowering, and inspiring reality exists for wizards and witches, and it’s closely within reach, accessible with a flick of the wand. For many who grew up with the Harry Potter fantasy, this is a dream come true.

However, there’s also bad news: you’re a muggle, and this wizarding reality was only built for those with magical inclinations. That’s to say, the Wizarding World is specifically not built for you.

Awful, no? This was close to how I felt when Niantic’s Harry Potter: Wizards Unite was released in June, and I realized my phone was on a list of devices the game doesn’t support. I’m a device-muggle, in the wizarding game world.

But owning the wrong device isn’t the only way to be excluded from the game. As it turns out, there are many ways HP:WU can make you a muggle.

What exactly made me a device-muggle? Well, since my phone didn’t have the game‘s required gyroscope and compass sensors — the components needed to detect the phone’s orientation — none of the game‘s AR mechanics worked for me. I’ve figured out how to download the game through the Samsung App Store (Google Play store won’t let me), and I’ve been playing it without AR anyway. It’s still fun to an extent, but this way of playing comes with certain in-game disadvantages that easily becomes discouraging.

I am not the only one in this position. Many players in the HP:WU community share this feeling, their main complaint being that without AR, it’s not possible to obtain high value loots (via the “Portkeys” minigame).

Sure, so we don’t get to fully enjoy a video game. Big deal, right? But the game is a good starting point for a discussion on AR accessibility. That’s to say, a discussion of who gets to experience the benefits of AR and who doesn’t.

As AR technology matures, it promises to layer the spaces around us with infinite informational possibilities, transforming the way we interact with our environment and each other. This reimagination will reach almost every aspect of the human experience, from entertainment to health and fitness, shopping, navigation, work, and education, just to name a few. But it also creates a new disparity between people who can and cannot access AR.

With HP:WU, those like me whose devices do not match the game‘s spec requirements were, by our inaccessibility, turned into device-muggles. For whatever reason that we decided not to purchase the phone models with these specific features, we are placed on one side of a digital divide, a divide which also extends to the physical space, excluding us from specific information and experiences that exist within our surroundings. But we are not the only type of muggles the game has created.

Like other Niantic titles, Wizards Unite’s gameplay is mostly built around points of interests, which are bound to their real-life GPS locations. In urban areas, there are simply many more of these points. An urban player could easily refill ‘Spell Energy,’ a resource necessary for all ingame actions, from the many Wizards Unite “Inns” on their daily commute.  But some rural players who live in areas where Inns are sparse would need to block out a segment of time in their schedule, to drive to places where there are any Inns at all.

In this way, the urban-rural contrast that exists in previous Niantic games also persists in Wizards Unite: playing in rural places is often more challenging and demanding.

As HP:WU’s dynamic game map respond to weather changes in real life, this also creates unequal accessibility for people who live in different areas. In a Reddit thread, players who live in certain parts of Texas, Ohio, and Arizona reported the game was limiting items spawned in their regions, in order to discourage people from playing outside during “extreme weather”.

While this feature is meant to protect gamers, some players say the implementation of these measures are too generalized. What the game considers to be extreme weather could actually just be a level of seasonal heat people are acclimated to in their region. Unintentionally,  the climate in some areas are preventing players from having normal access to the game.

Augmented reality has the potential to be the usurper of space, enabling spatial experiences that are beyond physical limitation. Instead, Wizards Unite’s AR seems to be replicating an urban-rural digital divide that already exists physically, and it’s even producing new region-specific software inconveniences. These restrictions are creating a player demographic of regional muggles.

How about players with disabilities?

As for disabled gamers, Wizards Unite’s answer seems to be simply “no access”.

Visually impaired gamers, for instance, expressed that Wizards Unite is not compatible with the accessibility options in both iOS and Android. Players who cannot see the Wizarding World on screen have no other means to interact with the game world.

And for gamers with mobility issues, since Wizards Unite require frequent visits to Inns as a prerequisite for any gameplay, those who cannot physically go to the Inns are excluded by the game’s most basic mechanic. While it’s possible to play as passengers driving around in someone else’s car, the speed of a car in motion is too fast for many in-game actions. The Wizarding Challenge, for example, requires a player to be in proximity of a point of interest (a “Fortress”) until the challenge is finished. Furthermore, these players are also not able to obtain the high value Portkey loots, since it requires them to walk around in an AR space.

The game’s community have brought up these accessibility issues,  and so far Niantic isn’t showing any intentions to meet their concerns.

It’s unfortunate that a game has built an empowering augmented reality, where players can literally perform magic and achieve the impossible, but those living with disabilities are barred from these experiences.

More generally speaking, when it comes to finding an identity in the Harry Potter world, most people wouldn’t want to be any kind of muggle at all. AR technology is on its way to providing users with new conveniences and agencies in diverse use cases, and when that comes, all of the accessibility issues surrounding HP:WU will also be relevant to AR at large. To make sure the AR rollout won’t make a big group of people into the muggles of our world, maybe we can start by addressing the muggling in Wizards Unite.

Players have started a petition on Change.org, requesting Niantic to include more accessibility features in Wizards Unite. You can support it here.

Read next: Google Assistant can now nag your family with assignable reminders