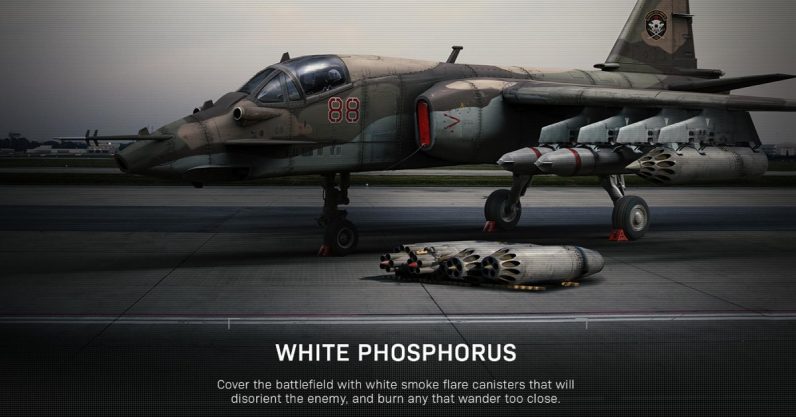 Call of Duty: Modern Warfare is adding a few goodies to reward players who maintain a killstreak — one of which is the deadly white phosphorus. As you might expect, the addition of the horrific chemical agent as a prize for good play isn’t sitting well with everyone.

Activision revealed today that killstreak rewards are back, and they include the usual buffs — armor, tanks, and an area-of-effect smokescreen. The latter is apparently white phosphorus — the announcement also mentions that it’ll harm anyone who gets too close. Purely from a gameplay standpoint, it sounds like a good way to control various parts of the map. And it is sort of realistic that it causes lingering burns, though that’s not necessarily a good thing.

In case you don’t know, white phosphorus is a substance that can be used as a self-igniting weapon in warfare. It can be used as a smokescreen and to mark enemy targets, but it can cause terrible injuries if it comes into contact with human skin. The United Nations’s Convention on Certain Conventional Weapons specifically prohibits the use of such incendiaries against civilian populations for this reason.

As you might guess, earning its use as a reward in Modern Warfare is rubbing some the wrong way:

‘8-year-old girl […] injured when a white phosphorus shell ripped through her home […] When she reached the operating room, white powder covered her skin, the oxygen mask on her face started to melt, and flames appeared when doctors attempted to scrape away the dead tissue’ https://t.co/9VJEFk9K76

Spec Ops: The Line, 2012: Includes white phosphorus to question why war is used as a guiltless source of fun in video games

Harrowing thread. Weird that COD is selling itself on “gritty realism” when it makes a war crime a power up. Spec Ops: The Line had a moment with white phosphorus and it was intentionally horrifying and destroyed the minds of the perpetrators. https://t.co/I844lzT859

On the one hand, it’s an understandable reservation: white phosphorus is a horrible substance that should not be used, and trivializing it as basically a smokescreen and chokepoint trap on a video game map feels more than a little icky. If you need a sobering reminder of what the substance can do to the human body, check out the CDC’s description of its effects.

On the other hand, it’s Call of Goddamned Duty. Expecting nuanced treatises on the horrors of war in the CoD multiplayer maps is like expecting to hear the complete works of Shakespeare performed in a Fortnite battle royale voice chat — I’m sure there’s a scenario in which it could happen, but expecting it is aiming just a bit too high.

For what it’s worth, developer Infinity Ward appears to be earnestly trying for a somber narrative, one in which the use of white phosphorus is treated as an appropriately monstrous thing. Director Taylor Kurosaki described the game’s story thus to Gamespot: “The war is everywhere. It’s in our own backyards. It’s in places that can suddenly become a battlefield at a moment’s notice. It’s about enemies who don’t wear uniforms. It’s about civilian collateral damage kind of being, unfortunately, part of the equation.”

It might not be a big deal were it not for the fact that white phosphorus is already infamous for being part of one of the most effecting and devastating scenes in a video game. *SPOILERS* if you haven’t played the excellent Spec Ops: The Line: the main character makes a choice at one point to deploy white phosphorus into what he later finds out is a group of civilians. This is treated with absolute horror and outrage, and marks a pivotal moment in the character’s downward spiral. It’s an image that sticks with you — and for some gamers (myself included), it’s that stomach-churning image that leaps to mind.

Read next: Quantum Darwinism may solve the question of whether God plays dice or not