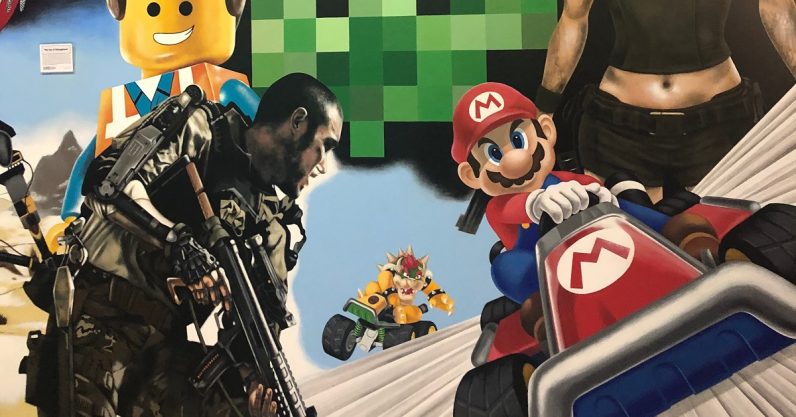 The Videogame Museum is a haven of gaming‘s ancient artifacts and oddball curios, and a great place to learn more about the hobby. Here are some of the coolest sights I spotted while visiting.

Recently I moved to a new house, and it wasn’t until after settling in that I realized I was only a 20-minute drive from the National Videogame Museum in Frisco, TX. That was not planned — life is just cool like that sometimes.

Naturally, on my first available weekend, I grabbed a Spyro T-shirt and a like-minded buddy and made my trip there.

The museum is inside a complex with several other educational spaces, including an art gallery and a miniature train display run by the Museum of the American Railroad. The museum was originally intended to be in Silicon Valley, and was funded in part by a Kickstarter campaign. The founders, John Hardie, Sean Kelly and Joe Santulli, apparently settled on Frisco after Gearbox CEO Randy Pitchford suggested it to them.

It’s not a large museum, and the way it’s laid out is not the most intuitive, but I can forgive that because of how much they’ve managed to pack into such a small space. Here are the most interesting things my friend and I spotted while we were visiting.

One large section of the museum is a recreation of a ’80s living room. Yes, that includes wood paneling, a CRT TV, and a painting of dogs playing poker (I’m going to assuming that’s what the 80s were like — I wasn’t there). According to the Kickstarter, this recreation has been a centerpiece of the museum from the beginning, and was part of the exhibit used to draw funding for it at gaming events.

The centerpiece of the room is the Intellivision playing a port of Donkey Kong. My buddy and I may or may not have hogged the controller for several minutes because, ancient or not, Donkey Kong is addictive as heck.

You ever have one of those moments when you think you know a lot about a subject — and then you’re faced with a shrine to that subject and you realize you know much less than you thought? The centerpiece of the museum is a large wall with almost every gaming console ever released, and while I’m pleased how many of them I was able to identify without reading the plaques, there were several I straight-up didn’t recognize.

The consoles are laid out on the wall in chronological order. It was a bit of a surprise to me, when I was seeking out the SNES — the first console I ever had, at age five — and found it in the middle of the display.

If nothing else, it’s a reminder how long the gaming industry has been around. One of the first things you see when you walk in is a display of several Pong machines — seriously, I don’t think I can overestimate how popular Pong must have been at the time. We saw Ultra Pong, Puppy Pong, Doctor Pong.

Those games came out in the 70s, when my parents were barely teenagers. And, judging by the line to play the massive, wall-sized version of Pong next to the entrance, I’d say it still holds up to some degree.

Another favorite was the display of various virtual reality machines. It’s amazing how many times this industry tried and failed to make this work before the Oculus, Vive, etc really made a serious go of it. The display includes the original Battlezone arcade cabinet with its VR periscope that I’m sure a generation of kids can blame for their pink eye.

Also, a cabinet full of gaming peripherals brought to mind how bizarre gaming in the nineties was, though admittedly lots of the peripherals reminded me of things that would later be more successful with the Wii — I found an Atari Joyboard and was immediately reminded of my Wii balance board. And the moment I laid eyes on the infamous Power Glove, I muttered, “Oh yes, the man, the myth, the legend.”

There are a few curios tucked in corners of the museum the like of which I’d never find on my own. In a section dedicated to gaming‘s influence on popular culture, there are the tools that Mario wields in the execrable Super Mario Bros movie. If you had asked me last month if I wanted to see those, I would most assuredly have told you no. But I did, and they brought a smile to my face — not so much because they’re the relic of some impressive pop culture event, but because it’s kind of cool to see how gaming overlaps with other forms of pop culture.

The museum also houses a few prototype consoles that never saw the light of day. One of them, on display in the mobile gaming section, is a pink Barbie-branded Gameboy that was part of a failed deal between Nintendo and Mattel. My friend and I spent longer than I care to admit debating whether we’d have wanted one as little girls (the answer is: I want one as an adult).

Out of all the things I saw at the Videogame Museum, probably the thing that confused me the most was in the early PC gaming display. I stopped to play a few minutes on the Commodore 64. The game was Karateka, the first game published by Prince of Persia creator Jordan Mechner. I had never played it before, but got a few minutes in before I loudly said, “Wait, why is Shovel Knight in this game?”

Needless to say, it’s not the star of the hit indie game my character is fighting, but I defy you to look at this picture and not make the same mistake:

The Videogame Museum terminates in an arcade filled with some of the classic cabinets. I wasted all of my complimentary tokens on Ms. Pac-Man and Frogger and have no regrets.

There’s something about being surrounded by all this gaming paraphernalia that makes me feel so connected to a generation of people who came before me. Sitting in that replica 80s living room and hollering with my friend whenever we got whacked by a barrel… it’s this euphoric sensation a bit like visiting the land your ancestors came from. You may not have grown up with this, but you still feel like it’s something that belongs to you.