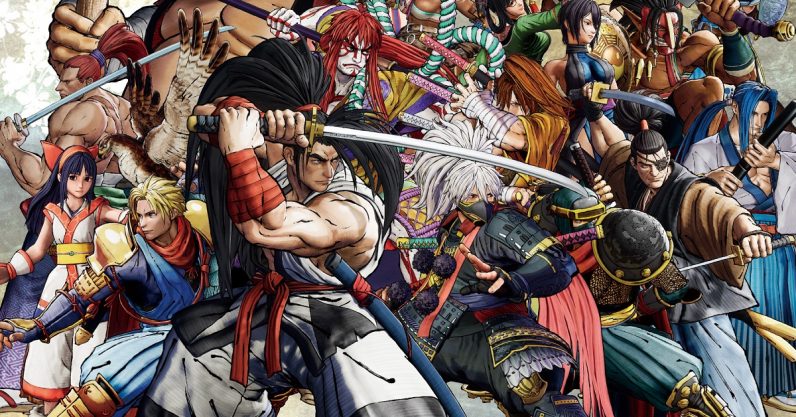 The new Samurai Shodown fighting game is a bit of a shock to the senses — it’s such a slow, deliberately-paced game compared with its contemporaries. And if you’re not used to it, you will get your ass kicked. Luckily, the game has such a simple and forgiving system that it almost encourages you to learn and get better.

Available for PS4 and Xbox One, the game is set in an ultra-stylized take on 18th-century Japan, with each character detailed in hard black lines and gorgeous, comic book colors. The characters are mostly the kind you’d expect for the time period (or rather, a fantasy version of same) — samurai, ninja, men with big muscles and big swords, women with delicate hands and wicked kicks. There are a few oddities thrown in, though. I’m not sure what a South American tribal warrior and a dreadlocked pirate lady with a sword bigger than she is are doing here, but I’m glad to have them.

The difficult part of describing a fighting game to someone is that you either sound like you’re talking about the most mindless, schlocky thing in the universe (“So then Scorpion throws his chain, and shouts ‘Get over here!”) or the most bizarrely obscure, technical thing in the universe (“Ken’s just too aggressive an offense character for me — I think I might be better off with Ryu’s combos”).

Samurai Shodown falls closer to the latter — it’s a game in which every single hit hits. It requires slow, deliberate thinking and a knowledge of your opponents moveset. And maybe it’s because I just came off of Mortal Kombat 11, a much less deliberate game, but I almost had a twitch while playing Samurai Shodown. And the game handed me my backside on a platter multiple times, almost as if it was yanking me back and saying, “Chill out.”

I can’t bend your ear about a story mode, because SS barely has one. It’s a series of fights strung together with a couple of cutscenes, which reminds me of Street Fighter V‘s original release. No lengthy story here, just an arcade mode in disguise. But this also serves the purpose of easing the player into the fight, training them against every character so they can learn their moves quickly. My preferred fighter was (because I’m boring) series protagonist Haohmaru — at first, I chose him just because he looked like your standard hero, but then I quickly warmed to him when it became clear he’s a boozy bruiser not at all like my Ryu or my Sub-Zero.

In a way, SS is the perfect game for a beginner. The button set-up is very simple. There are no lengthy, finger-breaking combos. Every character has the same inputs (but different attacks). The slower, methodical pace also suits those who are tentative and just starting out (provided you don’t have the aforementioned twitch). It’s a solid system that rewards anyone patient enough to learn.

I didn’t see exactly how bad I was until I hit the Dojo, an offline training mode, and tried to fight a ghost. SS touted this feature before launch — the ghost AI catalogs your moves during a fight and learns how you play. The ghosts currently don’t seem to have enough data to be truly formidable opponents, but I did recognize a few patterns when I was playing against mine. Blocking like a paranoiac, even when the opponent was across the screen, occasionally spamming a light attack unintentionally — yep, you got that from me.

But SS did something that no fighting game has in recent years: even if it made me feel like I had a complete lack of skill at any given fighter, it didn’t make me feel like that was my fault. Every time I failed — heck, even when I won — I felt like the game was teaching me patience.

Samurai Shodown isn’t going to suit every taste; if you prefer combos or a faster pace, this isn’t the game for you. But if you want to cut your teeth on a simple-to-learn-but-difficult-to-master fighting game, this is as good a place as you’ll ever find to start.