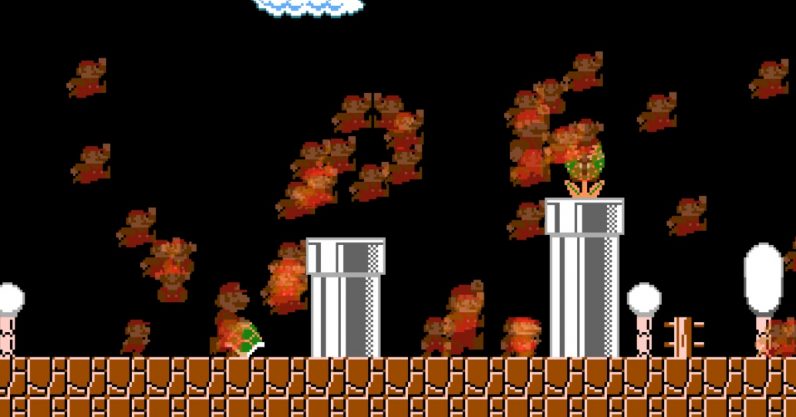 It’s finally happened… our beloved Mario has finally made his way into a battle royale game, just like everything and its shadow. My first reaction was, “What madness hath we wrought?” My second was, “I’ve played sixteen games already, what the heck?”

“Mario Royale” is a browser-based game that can be played on keyboard or controller. The game was created by YouTuber Inferno Plus, and uses shortened version of worlds from the original NES Super Mario Bros as the battleground, of sorts. You play against up to 99 other players, racing to see who can get to the end stage first. Your resources (Super Stars, mushrooms, Fire Flowers) are shared between players, meaning only a few people will be able to grab them. Considering Super Mario Bros is such familiar ground, getting to know the mechanics isn’t an issue — is the easiest game in the world to jump into.

As far as battle royales (battles royale?) go, what sets Mario Royale apart is that the environment thins the herd, rather than its members. Sure, you can fire off a well-timed shell and take out a few stragglers if you must (though in my experience that usually happens by accident), but this isn’t Apex Legends and you aren’t running around with a shotgun. Instead the player count dwindles as players inevitably fall into pits or jump into Piranha Plants.

The challenge isn’t how to take other players out, but how to race ahead of them. Unlike other battle royale games, it is possible to get second or third place, if you manage to survive to the end of a round and are speedy enough to be one of the first three to get there. The highest I managed was third, and I was way more proud of that than I perhaps should have been — but sue me, it’s a Monday and I’ll take what I can get.

That’s not to say the game’s perfect. It’s cluttered as all hell: all the characters look the same and are bouncing around on the same plane. So even when you can see the arrow hovering above your particular character, it can still be hard to pick yourself out of the crowd. More than once, I’d died to a Piranha Plant because I thought another sprite that’d safely leaped over it was me.

I would also advise not getting too attached to the game. The opening splash screen reiterates that this is a completely free fan-created project (though Inferno does sneak in a pitch for his Patreon) and begs Nintendo not to sue. I’m not sure I’d be willing to stake my life on Nintendo not suing, but more likely it’ll send a cease-and-desist first. If that happens, I wouldn’t be surprised to see the game go away — I don’t want it to, but I’m cynical like that.

Still, as long as it’s here, you can give it a try at this site.