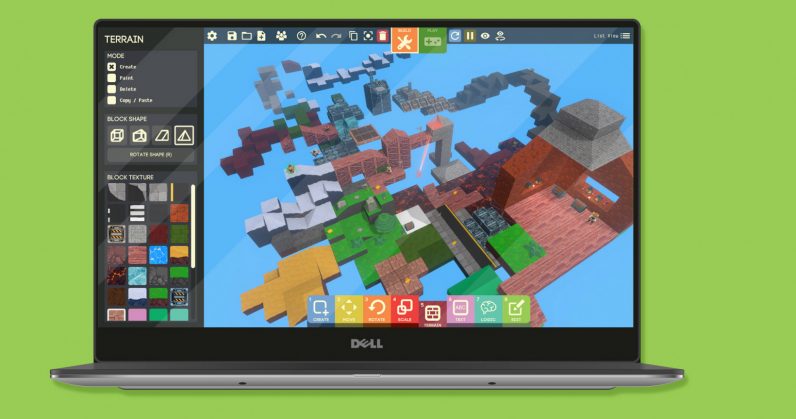 On its blog today, Google talked up Game Builder, its sandbox for desktops that lets you create 3D games without having to write any code (though you can if you want to). It’s available now on Steam, for Mac and Windows, for free.

There are other tools like this for creating games, but Google’s Area 120 – the company’s internal incubator for employees’ big ideas – says this one is designed to feel like you’re playing a game while making new ones. Game Builder has actually been around since last November, so there are a bunch of tutorials available on YouTube to guide you (in addition to the ones in the tool itself).

That’s about right – in my brief time trying the prototype today, editing a platformer demo felt a lot like building out an area in Minecraft. The interface is simple to use, with palettes of objects and terrain available to create environments with, and code cards to introduce or alter behavior and mechanics in the game. You can use Game Builder to make FPSes, platformers, and even racing titles.

If you can code in JavaScript, you can program cards to apply to objects and characters in your game. And you don’t have to worry about your creation looking exactly the same as anyone else’s: Game Builder lets you import 3D models from Google Poly – the company’s library for virtual objects that launched back in 2017 – to use in your project. Additionally, you can create games in co-op mode, and even build them out for multiplayer action.

If you’ve been looking to start tinkering with games, this looks like a great place to start. Find Game Builder on Steam.

Read next: Facebook signs major partners for its cryptocurrency network and it still sounds terrible