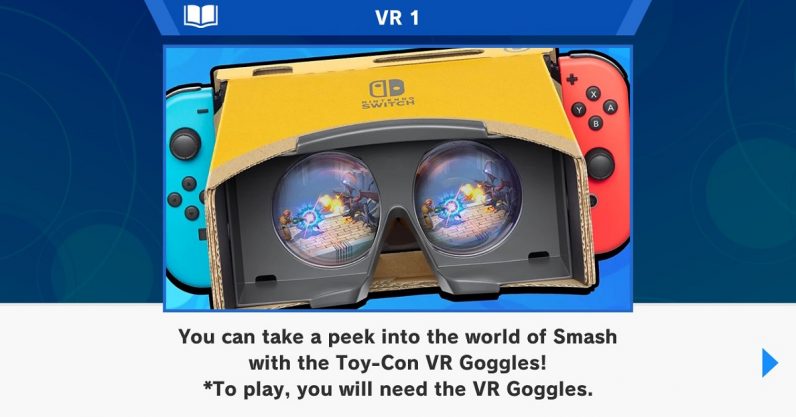 Nintendo revealed today it was adding Labo VR support for Smash Bros. Now don’t go getting all lathered up yet. It’s not as extensive as you think — though it’s still pretty nifty for those who want to join two of Nintendo‘s most interesting toys together.

The Smash Bros Ultimate patch, which rolled out today, adds support for Labo VR goggles among a few other general improvements. In order to access this feature, you’ll need to update the game and then look for it in the “Games & More” menu. The appropriate icon looks like the Labo goggles.

As you might have guessed, this isn’t intended to allow you to play in full-on spars with your friends. According to Nintendo‘s promotional trailer, the mode only works with “limited, timed, offline battles,” so you won’t be using this for those big multiplayer matches. And it’s not as though you’d get a great deal out of using it during a match even if you could. The goggles don’t really give you a better view — the slightly zoomed-in perspective kind of puts you in the position of an audience to the skirmish, craning your neck every which way to get the full picture.

The main purpose of this mode appears to be allowing a gander at the fighters and stages that’s slightly different from the basic. As VR experiences go, it’s not exactly “The Limit.” It also makes the stages look unexpectedly scary — I got vertigo just watching the promo video when whomever was using the Labo looked down from the top of Prism Tower. But that’s my hang-up, and it’s still a fun peek at the stages. I would love to see what a Corneria fight looks like in VR.

Labo itself could always use the publicity boost. The VR attachment (or Toy-Con) doesn’t exactly have the robust library in the likes of PSVR, Oculus, etc, even if it’s supported by the likes of Breath of the Wild. When TNW first looked at Labo, we found it intriguing but situational at best.

Still, if you’ve got Labo and Smash Bros Ultimate, then it’s a great way to get some extra mileage out of both while enjoying a little extra spectacle with the fights.