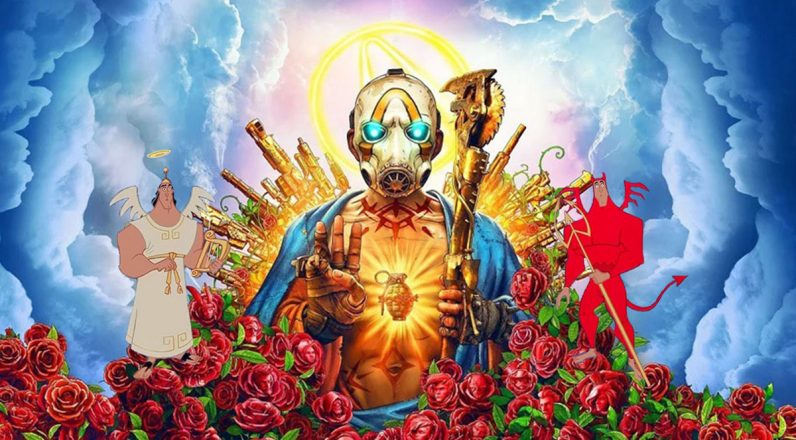 2K Games revealed this week that Borderlands 3, the latest entry in the much-loved co-op shooter series, will be released on the Epic Games Store as a timed exclusive. Does this mean you should buy it there? Well that’s a tricky question, with both sides having some reasonable arguments in their favor.

The “Store War” has been going on for months now — ever since the Epic Games Store was announced late last year. There are a myriad of arguments both for and against the competition between Steam and Epic — all you have to do is skim the surface of Gaming Twitter or Reddit if you want to find them. And up to now, it’s been more academic than truly practical — by which I mean no one side had that “one big game” that would sway the public into abandoning the other.

Hey, your unwavering allegiance to Steam is kinda weird. It's a shop, with a shitty refund policy, owned by a billionaire meme, run by a company that made maybe 4 or 5 pretty good games a while ago. You're being weird.

But Borderlands 3 is that one big game — the shiny weight that tips the scales of this cold war one way or another. Most of the other games exclusive to Epic aren’t necessarily the most hyped. The Division 2’s and Metro Exodus’s predecessors were modest successes, but I don’t think anyone would argue their names alone sold anyone on the Epic Store.

Borderlands, on the other hand, is a bonafide phenomenon. The whole series has sold tens of millions of copies. It’s still being played by thousands of people daily. This isn’t just a feather in Epic’s cap — it’s a damned coup. But does that mean that I — a hypothetical fence-sitter who games primarily on PC — should make the transition to the Epic Games Store in order to play Borderlands 3? That’s a tricky choice, and not one I can make on my own. So, taking a leaf out of my buddy Callum’s book, I asked an angel and a devil to help me figure the issue out:

Angel: Let’s start with the most important fact of all: Borderlands 3 is on its way! It’s been five years since the last game in the series came out — we should be happy the game is coming, regardless of where it’s going to be released.

Devil: Unless you’re one of the literal millions who played both of the previous games with your Steam friends and were hoping to do the same with 3. Better hope all of your friends are willing to make the transition to the Epic Store with you.

Angel: Don’t be like that. It’s a timed exclusive, meaning if you’re so married to the idea of playing with your Steam friends on Steam, then you can six months after the game comes out. No one’s forcing you to move to Epic full stop.

Devil: Don’t expect me to be grateful for that. I prefer to keep my games in one place, in one library, and I don’t appreciate being penalized for that. Opening more than one launcher to access the games for which I paid is annoying as hell, and I don’t see why I should have to in order to accommodate devs who put Epic’s paycheck ahead of their players.

Devil: Epic’s not doing themselves any favors by buying exclusives out from under Steam. Say what you will about its other practices, but taking food from the mouths gamers who’ve already paid for the pleasure of playing on another system is a middle finger if I’ve ever seen one — and Tim Sweeney has said he’s gonna keep doing it, regardless. Phoenix Point’s Kickstarter backers were even promised Steam codes as one of the incentives, and now the developers are having to give the money back — how messed up is that?

Angel: How is that Epic’s fault, though? Developers chose that option because they could take advantage of the better revenue split at the Epic Store. And several of them have been vocal about the fact that it’s just a better place for them. They don’t get lost in the free-for-all that is the Steam store, for starters. Seriously, that place is so overcrowded that you’re just as likely to find a shovelware game as you are a well-made indie. Epic offers a healthier revenue split, exposure to a new audience, and pride of place in a much smaller store. It’s healthy competition!

Devil: No, “competition” is when a store has better features that entice both customers and developers. Buying exclusives to force gamers to come to you is rigging the rivalry in your favor. Epic doesn’t have any of the conveniences Steam does. Steam has user reviews, cloud saves, achievements, a mod library… it’s just a richer experience overall. Why should I have to move to a store with less features for me?

Angel: Are achievements really worth digging your heels in over? Steam didn’t even have them until a few years after its release. In fact, a lot of the stuff for which we now praise Steam — all the stuff you just mentioned, in fact — didn’t exist until years after it launched, and yet we’re expecting the Epic Store to have everything straight out of the box? Isn’t that a little unrealistic?

Devil: I guess we’ll have to agree to disagree. I don’t want to be forced to play a game on an unfamiliar platform I don’t find appealing.

Angel: And I don’t mind moving away from the familiar if it means I get to play a new game in my favorite series. But can we agree at least that the anti-Chinese sentiment wrapped up in the debate is more than a little scary?

Devil: Phew, yeah… even I don’t want to go there.

Read next: Viveport Infinity is good – here's how HTC can make it great