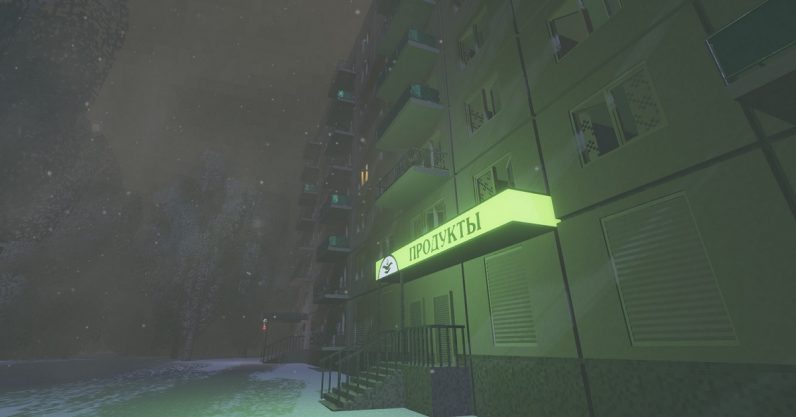 Shakespeare had it right: “A sad tale’s best for winter.” If you’ve ever wanted to experience the cold, existential despair of being bored and alone on a winter night, a game that fills that niche recently appeared on Steam — a strange little experience titled “It’s Winter.”

Sometimes there comes a Steam game so unusual that you’re not quite sure what to make of it. Last time I had that feeling, it was when I discovered Viscera Cleanup Detail (for those of you who haven’t heard of that game before, you’re welcome). I heard about It’s Winter from the good folks over at Rock, Paper, Shotgun and thought, “That looks odd. I need to check it out.”

The game appears to take place in a suburban apartment block in… Russia, I want to say? The radio broadcast is in Russian. You’re alone in a small, cozy apartment with a fridge full of food, adequate lighting, and nothing whatsoever to do. You can take your house key and go for walk around the deserted complex, you can knock on people’s doors, or you can even tidy the trash-strewn hallways. Doesn’t matter — you never get a reaction from the world at large.

There’s something so still about this game. When you’ve gone out into the bleak midwinter eve and come back to your apartment, even the comforts of home around you don’t distract from the silence of it all. The TV projects static, you can’t read any of the books, and even the ability to cook your food only takes up seconds of your attention.

It’s Winter appears to be part of a multimedia art project by Ilia Mazo, which you can read about here. I don’t think knowing about it is essential for getting what the game is trying to put down. The game described itself as “sandbox, post-soviet, sad 3d, russian sadness” and brother, it ain’t kidding.

Still, it’s a good example of a game conveying a feeling in a way less interactive media might not be able to. Believe me, it didn’t take long for the quiet ennui of this situation to settle in. Even in the middle of a house full of roommates and noise, the stillness and loneliness of the game ate at me.

If I have one complaint about the game, it’s that it’s got quite a hefty price tag for being so… empty. It costs $9.99 on Steam, which is a little more than I’d normally be willing to put down to feel sad and lonely.