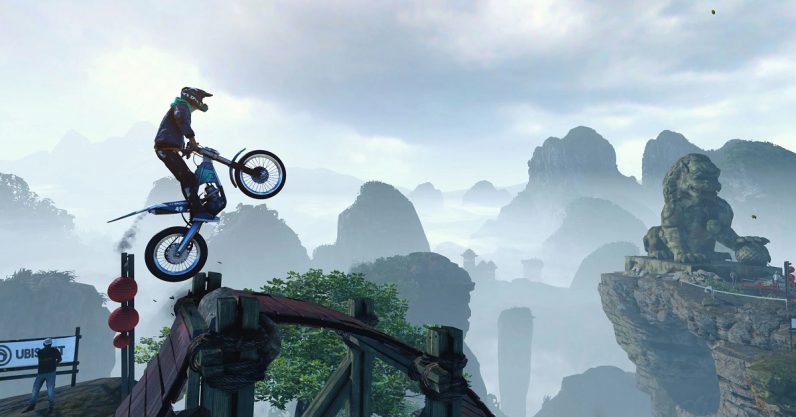 Trials Rising is exactly the kind of addictive, over-the-top, slapstick fun that I didn’t realize I was missing. It’s a challenging racing game, but with a very forgiving difficulty curve. It has beautiful scenery that will occasionally leave you breathless.

When I mentioned to a friend I was interested in Trials Rising, the friend said he’d never heard of the series, and asked what kind of game it was. That’s surprisingly hard to boil down into a single sentence — it’s kind of a platformer, kind of a racer, and kind of a sports game. The game is done in the 2.5D style, with three-dimensional graphics but all action taking place on a single plane. You ride a motocross bike across a series of tracks, racing against the clock and, occasionally, other bikers, to get the fastest time. Between you and the finish line will be any number of crazy obstacles, such as exploding barrels, broken tracks, or incredibly high jumps. Getting to the end in one piece requires a lot of patience, but the ride is completely worth it.

The tracks are by far the best part about the game. Ranging from historical architecture to natural wonders to a film set (where your character briefly rides past the film’s CGI monsters), they’re a delight to cruise through. My favorite was Balloons Over Bagan, which sees you flying through the glorious Burmese hot air balloon show. It’s like The Amazing Race meets an Evel Knievel lucid dream.

Rising comes packaged with one of the most encouraging tutorial levels I’ve ever played (even if it’s not wholly easy) and the side challenges give you a good reason to revisit tracks again and again. Couple this with the great soundtrack, and this game feels so joyful to play that it’s hard to put the controller down.

The Trials series’ trademark physics are back, in which you must carefully balance the weight of your rider against the speed of the bike. If your little rider avatar is even one degree off, you can throw the bike comically out of whack, flipping dramatically across the track and requiring a restart. It’s one of those challenges that doesn’t hurt too much, both because it feels possible with a little extra practice, and because the rewards when you finish a track are so cathartic — you get to watch your little avatar get blown up, or ragdoll off a cliff, or get stuffed into a port-a-john.

The restart is probably the series’ most useful mechanic. Not that I want to get too personal here, but I’m the type of gamer who likes to do a thing perfectly. If I mess up in the middle of an important objective, I’m more likely to go back to an earlier save and do it over than I am to adapt on the fly. I’ve scrapped whole sneak missions in Deus Ex because an enemy caught a glimpse of me. I’ve undone hours of progress in Fire Emblem when a favorite character died in battle. And in Trials, I obsessively play each track until I’ve gotten gold.

That’s a long way of saying that Trials actually makes this a viable form of play. While other games might bog you down in unskippable cutscenes or excessive loading before you can get to your do-over, Trials understands that perfectionist itch and takes you straight back to the top of the track with one button — the downside being that the framerate can stutter or occasionally freeze outright when you do this.

I usually don’t care much about minor performance issues — one little screen stutter here and there isn’t going to ruin the average game for me. But Trials is one of those rare exceptions where consistent framerate and speed are actually important, and Rising’s Xbox One X-ready graphics consistently overtax my poor PS4.

If you can get past the frustrating load times, you’ll find the rest of the game a hilarious blast to play, and curiously addictive. One of the loading screens even reads “‘Just one more track.’ — A Trials player at 2 am.” I read that at around two a.m. while starting one more track, so this hit far closer to home than the average fourth wall break. And if you ever want to have a huge belly laugh, try doing the tandem bike with a co-op buddy — it’s like watching Laurel and Hardy compete in the X Games.

But regarding the side activities I mentioned before, I have one question for Ubisoft: Why the heck do we have lootboxes in this game — especially lootboxes that only ever give you useless cosmetics? Trials is about two things: the bikes, and the tracks. Why would I ever want to spend real money getting an ugly jacket and an arrow sticker for my in-game avatar? As long as they don’t strap dumbbells to their chest, I couldn’t care less what the little fucker wears.

If they only popped up every now and then, that’d be one thing, but jeez, Ubisoft. Every five minutes, every other track… loot box, loot box, loot box. And considering some of the later portions of the game are a grind and a half, anything that diminishes my excitement in any way compounds the problem. This just feels like a waste of development time that could have been spent putting together more tracks or a new bike (of which there are only three).

Which also brings me to one other complaint: why are things locked behind a XP-based progression system? I’m fine with certain contingents of the globe being locked off until you prove yourself, but shouldn’t these new levels be unlocked by some show of skill, such as beating all the tracks of the previous level? I managed to get to the Asian tracks by only having beaten one of the preceding European tracks, mostly because I spent so much time playing the tutorial levels.

Still, those are relatively ignorable complaints. Trials Rising is so fun and so good at its essential gameplay functions that the boring stuff will be completely forgotten around the time you ramp your way across the Grand Canyon.

One of the tracks in Trials Rising is a level set around — and on — Dutch windmills that culminates in a crash into an exploding scarecrow. Sadly, I was not able to get this included at TNW 2019 — but I’m sure that’ll be the second most awesome Dutch show I’ll see this year! Join us this year and learn about all the things in tech that are even better than exploding scarecrows. Buy your tickets here.