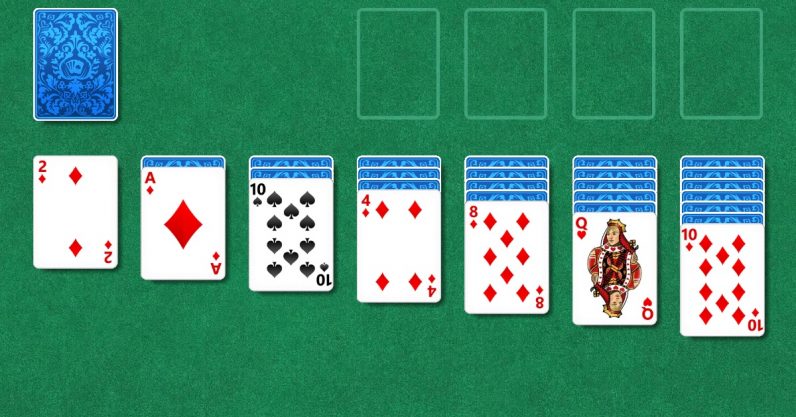 There’s a certain kind of computer game everyone plays, the kind that have been around for so long most people don’t even know a time when they weren’t always available to play. No, I’m not talking about Fortnite. I mean the really ubiquitous games: Minesweeper, FreeCell, or Mahjong. How have these games lasted so long, and how’d they make it did they make it onto our computers?

It’s actually thanks to the efforts of game developers like Arkadium that these games are now so freely available. You may not have heard of Arkadium, but you’ve almost certainly played one of its games. It provides both games and interactive graphics to news sites, such as The Washington Post, CNN, and the Chicago Tribune. Oh yeah, and it also made a little something you may have seen on your last Windows computer, that goes by the name of solitaire.

It’s games like these — card games, word searches, crossword puzzles — that have really lasted the test of time. They’ve existed since long before computers were ever around, and yet they’ve made the leap to our screens so seamlessly that most of us never stop to think how unlikely it is.

So how do these most archaic of games go digital so seamlessly, and why does everyone enjoy them so much? We decided to go straight to the experts at Arkadium to find out.

Jessica Rovello and Kenny Rosenblatt, who married in 2004, started Arkadium in 2001. Speaking to TNW, Rovello said they started the company as a game development studio, making what she calls “evergreen casual games.” The company claims their proffered suite of games, called The Arena, “retains your users while they engage with brand-safe interactive content.”

If a major news site has a games section, you’re quite likely to find the phrase “powered by Arkadium” on it somewhere. The games it offers run the gamut from solitaire and sudoku to word searches and backgammon.

Rovello says the company cut its teeth by offering skill-based games that could be played competitively, before transitioning to its current model of free single-player games. She said they quickly realized there was an opening for that particular kind of game with old-world media making the leap to digital:

You have these publications — newspapers in particular — that have been around for over 100 years, and they’ve always had a funny section and a crossword or a word jumble. As these companies were starting to digitize in the 90s and early 00s, we realized there was an opportunity there. They didn’t have in-house game studios — you weren’t going to need that at the New York Daily News, for example. So could we use our expertise to provide the games we created to those publications. So that’s how we built out the business.

Describing their product in a nutshell, Rovello describes a large portion of the evergreen titles as “games that have been around since the beginning of time.” So why are we still playing them on our computers?

The games everyone plays

Games have a tendency to come and go, but these puzzle games are so entrenched in our society that we don’t even stop to think how long we’ve been playing with them, or how often.

For example, the game we all know as solitaire (which is a variant called “Klondike” and just one of many) has been around since at least the beginning of the 20th century, and its predecessors are known to have been played in Europe since the early 18th century. Jigsaw puzzles have also been around since roughly the same time, and the first crossword puzzle was published in 1913.

And not only have they made the leap to digital, they apparently haven’t lost an ounce of their appeal. Rovello says Arkadium’s casual games reach a market of tens of millions daily, with consumers in 97 percent of the world’s countries. In 2018, the company’s games were played 830 million times. That’s a lot of people playing a lot of Freecell and Mahjong.

Solitaire has been on Windows computers for almost as long as they’ve existed — believe it or not, it was once considered a major concern among employers due to its time-wasting potential and the fact it came pre-installed on most computers. In 2006, then-NYC Mayor Michael Bloomberg fired a clerk on the spot when he saw a game open on his (the employee’s) computer, saying, “There’s nothing wrong with taking a break but during the business day at your desk, that’s not appropriate behavior.”

Compared with the changeability of AAA games or even most casual games, it’s very unusual to see games stick around as long as these games have. So what’s their secret?

Rovello said she believes the secret to these games‘ lasting appeal is both their familiarity and the fact you rarely get the same game twice.

You can play solitaire a million times, and every time you’re gonna get a different layout of cards. So even though you can master the mechanics, and have tips and tricks you learn over time, every time you play feels like a fresh, new experience. Evergreen games are that great combination between comfort and understanding, and challenge, without being such a dramatic change that you think “I don’t have the time to learn this.”

The rooted appeal of Arkadium’s clients might also be another source of views: everyone knows about the New York Times crossworld puzzle, and it went live on the web at the same time the newspaper began publishing online daily in 1996.

In conclusion, Rovello feels that these “evergreen casual” games have already been tried and tested by generations, which has both honed their playability and made them universally recognizable. Just by being the old standard, she says, these games last: “A lot of game developers are chasing the golden ring, to make something nobody’s ever thought of or seen before. There’s value in that, but a lot of times, people don’t have the time for that, or it gets lost in among all the games that are out there.”

No matter which gameplay craze takes over the popular market next year, or five years from now, or twenty years from now, I think we can all be fairly certain solitaire and mahjong will still be around, and we’ll still be playing them.

Jessica Rovello is joining us on April 24th to host a TNW Answers session! You can ask her anything about Arkadium, Solitaire, and more here.

Read next: ActionDash works great for visualizing the time you waste on your Android phone