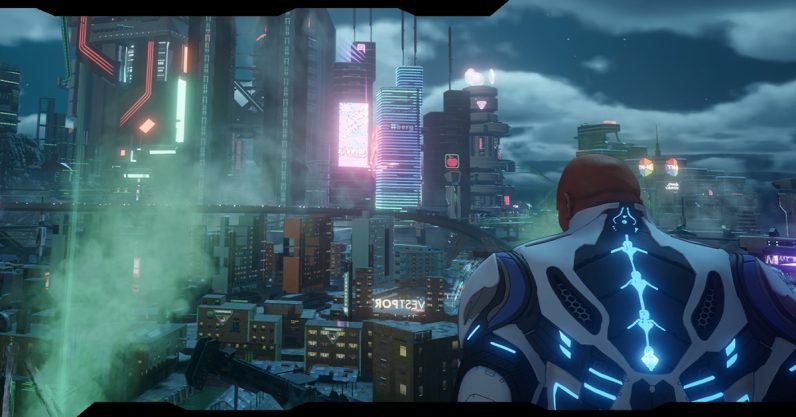 Crackdown 3 is a game for action fiends, the sort who don’t want any of that pesky “story” or “depth” to get in the way of their next dopamine release. It may not be the smartest or most sophisticated game to come out this year, but goddamn is it fun.

This is by far the most colorful of the games hitting the market this week. In fact, if Metro Exodus is a gritty, gloomy HBO special, then Crackdown 3 is a bright, playful Saturday morning cartoon. Good guys are good, bad guys are bad, and the morally upright hero can shred a tank with their bare hands.

You play a member of an elite mercenary group called the Agency — you’re creatively called “Agent,” — who have been called upon to take down a terrorist group. This shadowy cabal of villains launched an attack that killed all electrical power in the world. The only place that still has light is their island, New Providence, where they’ve lured desperate refugees for nefarious purposes. The Agent has to go in and dismantle their operations by exploding, shooting, and beating the crap out of everything within reach. It’s like Just Cause 3 got into a head-on collision with Saints Row 4.

It ain’t Shakespeare. But it’s not trying to be, either.

New Providence drips with color and character. It’s the perfect neon-bright sandbox for Crackdown’s brand of mayhem and destruction. You can choose to play as any of the Agency’s … Agents, but if you’re playing as anyone other than Terry Crews’ loud-mouthed Isaiah Jaxon, then you’re missing out.

The entire point of Crackdown 3 is to fill an increasing number of progress bars. Every time you take out a major objective, you’re told you’ve completed “X out of X” of that objective. It’s all one big collectible hunt, especially given that not every mission site is on the map and you have to hunt them down in order to find them. Every mission is some variation on “Explode the thing” or “Shoot the thing” — no exceptions.

You also collect orbs, which boost your stats. There are hundreds, enough that you can find them just lying around, but some are in obscure enough places that each section of the map turns into a treasure hunt. And every single one plays a sweet musical jingle when you collect it.

The game is built on this concept of instant gratification, where you collect orbs or objectives, and the game rewards you with a sound cue and the in-game characters telling you how awesome you are. I would shun it except… it works. After just a few hours, I was hearing the orb collection sound in my sweetest dreams. It’s addictive.

That said, it does get old after a while. The fact that there’s very little story between the manic action leaves the whole town feeling a bit empty. It’s like going on a dozen binges of candy corn in quick succession, with only a carrot in between. After a while, unless you’ve got the biggest sweet tooth this side of Twisted Metal, you’re going to get tired of the sugar rush.

I have to mention the multiplayer. “Wrecking Zone” runs on a separate client, and feels only tangentially related to the main game. There’s “Agent Hunt,” where everyone tries to kill the other team members, and “Territories,” where teams defend captured points while also trying to kill the other team members. It has the same bouncy, energetic movement as the campaign, albeit in a computer-simulation arena rather than a bright city.

Admittedly, I was only able to play a few matches during the trial period before release, but I think I was able to get the gist of it. It’s fun in short bursts, but without the collection aspect that makes the single-player campaign so enjoyable, it can get old. And since Microsoft have confessed it hasn’t yet implemented a feature allowing you to play with your friends, it can also be lonesome.

Crackdown 3 doesn’t demand much from its players. It offers you satisfying, chaotic gameplay and not much else. Sometimes, that’s all you need from a game.

Read next: Canon shows it's serious about full-frame mirrorless with the affordable EOS RP