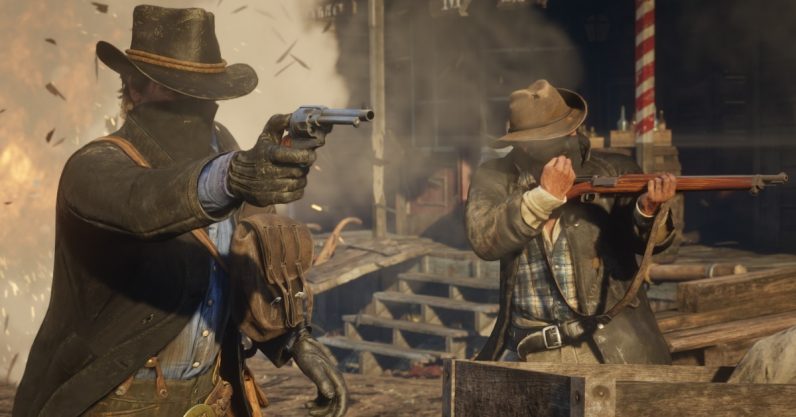 My first NPC kill in the Red Dead Online beta was an impulse. I rode past the NPC on my horse, whom I’d named Vanessa, and this guy felt the need to insult her. So I grabbed my revolver and put two rounds in his head, then got off to frisk his body. The net yield of first blood? 49 cents — which turned out to be just enough to get some more bullets.

Yeah, Red Dead Online, at least when I started, was pretty brutal, and not just because the people in it shot first, asked questions never. The biggest problem for me was that the prices were steep. I was positive it would take me at least 12 hours of playtime just to get enough gold bars to customize one part of my revolver. Luckily, Rockstar seems to have realized that, and has since taken measures to balance the economy. So that takes care of the money… and leaves the players.

First things first, RDO is just as gorgeous as the game it’s building on. Arid, open plains, towns built with rickety boards… There’s something about this setting that brings out my latent Texas drawl. I reacted to being shot at by saying, as my character, “Now come on, y’all. There ain’t no call for that.”

The story in Red Dead Online is quite a bit more involving than that of its older sibling, GTA Online (minor spoilers for the first five minutes here). Your character is a drifter falsely accused of murder and sentenced to death. At the last minute, they’re rescued from the noose by the widow of the person they supposedly killed, who knows they’re innocent and thus believes she can only trust them to help her bring the real killers to justice. It’s a surprisingly compelling yarn — perhaps not quite as interesting as the main game’s story, but also a bit more pleasantly adventurous.

The problem with trying to build your own legend as a character is that, when you’re out in the world, there’s really no way to relax and try to get used to your surroundings. My first brush with trouble was when I was hunting for some deer at around Level 4, and a group of players came by and began shooting. After dying to them, I ran back with a rifle to rescue a critically injured Vanessa. I took revenge on one, hopped on my revived horse, and tore out of there like hell itself was lighting up her tail. Yeah, what I’m saying is this game desperately needs a passive mode.

Oh sure, the beta has a passive mode of sorts. When you’re in your camp, you can raise your flag and make yourself immune to attack while you’re fussing around cooking, doing your flower arrangements or whatever. But considering GTA Online had a passive mode you could turn on wherever and whenever you pleased, the fact this game doesn’t have one feels like a step back.

If nothing else, the game does replicate the feeling of being a lone outlaw in a cutthroat world, both for how hard the hustle is and how easy it is to get steamrolled by better-funded, better-equipped players working in a group.

I remember at one point, when I was super low-level, I came upon a posse of much more experienced players robbing what appeared to be a stagecoach. I’m not really sure, because Vanessa and I blasted past them while I shouted into the mic, “You gents have fun!” (I have no idea if they even heard me, but I’m sure my neighbors now think I approve of their football party.) The game did tell me I could oppose them and try to take their ill-gotten gains for myself, but I basically told the game it was loco.

This setting does lack the rooted appeal of the main story — there’s no returning to the comfortable home of Dutch’s camp, always such a pleasure while playing as Arthur Morgan. And considering how much more empty the Western world is compared with the hectic satire of urban decay that is Los Santos, I was definitely feeling the folk song vibe — “O bury me not on the lone prairie/Where coyotes howl and the wind blows free.”

Red Dead Online is a great way to remain in the world of the West now that I’ve finished Arthur Morgan’s story. It’s got some kinks to work out, and I don’t foresee it having quite the same level of zany, anarchic shenanigans as GTA Online — at least not any time soon. But it’s still a fun world to romp around in, and I’m willing to stick with it, and see what Rockstar makes of it.

Read next: 4 fitness tech trends you can expect to see in 2019