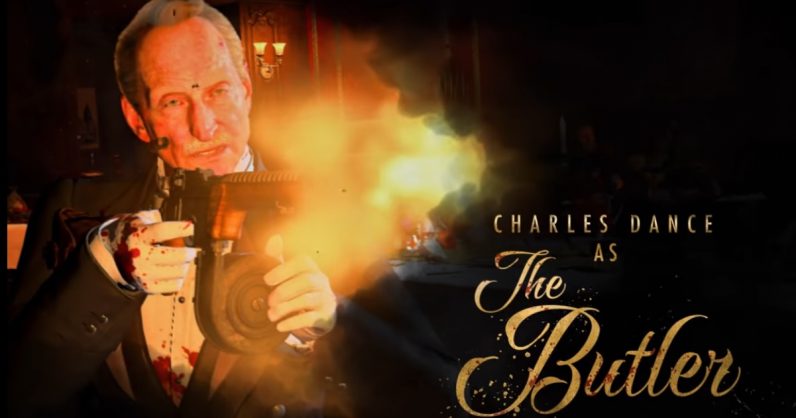 The latest DLC addition to Call of Duty: Black Ops 4, a Zombies mode called “Dead of the Night,” is a campy, extraordinary map filled with undead mayhem — notable as well for starring four very well-known actors. I got the chance to speak to one of them: Charles Dance, who our readers will probably recognize most readily as Tywin Lannister in Game of Thrones.

In “Dead of the Night,” Dance plays Godfrey, a butler caught in the middle of a zombie outbreak in a palatial mansion along with three other misfits — and whose name has to be a shout-out to the classic 30s comedy My Man Godfrey. Dance describes him thus: “He’s enigmatic. You’re not sure if he’s a goodie or a baddie to begin with. You never know which way he’s going to go.”

When asked how he came to be part of this tableau, Dance said, “I read the script and thought ‘Wow, this is incredibly well-written.’ I called my daughter and said, ‘I’ve just been asked to do Call of Duty.’ And she said, ‘Oh my god, it’s huge!'”

She’s not wrong: Black Ops 4 made $500 million in sales on its launch weekend, and the fact that it’s considered a relative disappointment for the series says more than any words could just how many people are buying these games.

Describing the behind-the-scenes process, Dance said the most unusual part was not necessarily the voice work. “Almost all of it was something I’ve never been asked to do before. Other than taking a 3D image of my face, I then sat and did a couple hundred expressions. You sit there, the light flashes, and you do ‘anger,’ ‘amusement,’ ‘sadness.’ They’re put in when they do the animation, and it’s an extraordinary process. I was dazzled by it.”

It’s been a couple of years since the Call of Duty series released a game in which it cast recognizable actors as characters in its main games. It’s happened a few times in the last decade — recall Kevin Spacey and Kit Harington as the villains in Advanced Warfare and Infinite Warfare respectively. But in each of those cases, it was a bit of a novelty — a selling point to put in the game‘s trailers: “Watch the actor currently best known for Jon Snow ham it up as a warlord from Mars.” It’s a novelty absent from Black Ops 4‘s predecessor, World War II.

By contrast, the Zombies mode has consistently cast well-known actors as its roles, the zenith of which was probably the first Black Ops‘s “Call of the Dead”, in which the likes of Sarah Michelle Gellar, Robert Englund, Danny Trejo, Michael Rooker, and George A Romero (yeah, that George A Romero) played themselves. Other familiar faces — or, more accurately, voices — who’ve appeared in the Zombies modes throughout the years include Malcolm McDowell, Ron Perlman, David Hasselhoff, David Tennant, John Malkovich, Bruce Campbell, and quite a few others — more than I’d have room to fit.

Dance had nothing but good things to say about the team working on the game, in particular Treyarch’s lead writer Craig Houston. “Everyone who’s done video games — we’re hired guns, basically. We’re tools in the toolbags of the directors, writers through which they create this extraordinary thing… The quality of the writing in this terrific. It really is.”

Dead of the Night is available now to those who bought Black Ops 4‘s Season Pass. Dance is joined in the fracas by Helena Bonham Carter as Madam Mirela, Brian Blessed as Brigadier General Jonathan Warwick, and Kiefer Sutherland as Gideon Jones.

Read next: Kindle Paperwhite 2018 Review: The best ereader for the money adds waterproofing and audiobooks