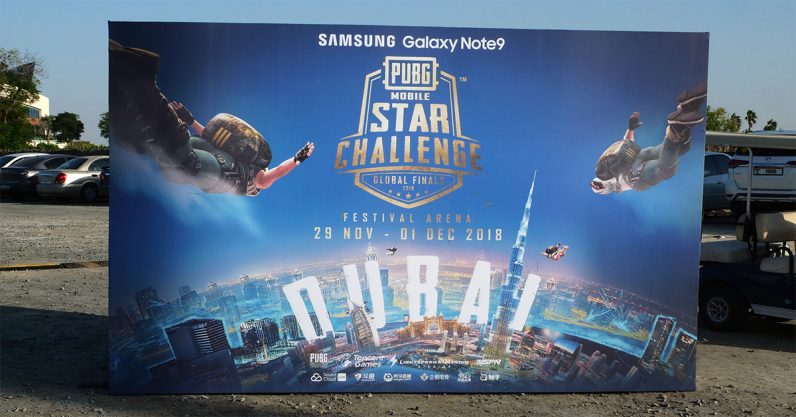 When you get invited to fly to Dubai to watch a bunch of people play a game on their phone, you don’t say no. Especially when the people are professional gamers, the prize is $600,000, and the game is PlayerUnknown’s Battlegrounds.

The idea of a heated esports tournament taking place in the world’s most poshest playground intrigued me, so I packed a suitcase with ‘modest clothes’ (as the invite specifically instructed) and hopped on a plane.

Later on, I realized that Dubai’s geographical location makes perfect sense for a tournament that attracts players from all corners of the globe.

See, PUBG Mobile’s popularity isn’t restricted to one region. Because the global prevalence of decent smartphones and mobile internet, this game has found its audience in places where its PC and console siblings haven’t.

For instance, a player named HotJukes from the North American team Wildcard Gaming, explained how he couldn’t play online games because he lives on a farm in a remote area of Texas. He didn’t have broadband but he did have a 4G connection so PUBG Mobile was his way to compete online.

PUBG Mobile has only been on the market for 8 months, but it already has amassed a popularity seldom seen in the mobile gaming space. PUBG Mobile sees over 20 million active users every day and Google recently dubbed it the Play Store’s Best Game of 2018 (which Fortnite isn’t on, fyi).

PUBG Mobile’s popularity didn’t come from nowhere. Before Tencent ported the multiplayer shooter to mobile, it was already extremely popular on PC since its release in 2017. Even before that, the game’s Battle Royale type gameplay emerged from other online shooters, where intrepid modders invented the ruleset, before anyone ever dreamed of the commercial successes that PUBG and Fortnite turned out to be.

The concept is simple: you drop 100 players on an island, and whoever survives the longest wins. The island is huge, but there’s an ever-shrinking circle of death that drives players together to an increasingly smaller spot. It can played solo, in duos or in teams of four. Everyone starts without weapons and armor and has to scrounge through abandoned buildings to get their murder gear. It’s a simple concept that has kept players hooked in a way that I’ve rarely seen in my decades of covering games.

In Dubai, the world’s best 20 teams of four competed over the course of three days to win that prize pool. It was obvious from the start that this was a big deal for publisher Tencent.

The tournament took place in the Dubai Festival Arena, an expansive venue that packed nearly 5.000 braying fans from all corners of the globe. Like the previous PUBG Global Invitational, the stage was intricately decorated with props and big-screen displays, to the point that I almost forgot things were taking place on a smartphone.

I must admit, I was skeptical of the idea of a mobile game being played competitively. I knew people took PUBG Mobile seriously, but I didn’t know how it’d play out in a competitive setting, in a stadium full of spectators. My doubts disappeared as I sat down to watch the first match.

The teams were sat in booths along the sides of the venues and the audience could follow along on a gigantic LED screen in the center. Blinders were put in place so that the teams couldn’t cheat by peeking at whatever the audience could see. In a game that’s all about positioning, seeing where the other teams are would present a huge (and unfair) tactical advantage.

Each day saw players fight four different matches, duking it out to win as many points as possible. The first and third days saw players compete from a first-person perspective, while the second day was fought in the third-person.

Following the frantic events was easy, thanks to the huge screen in the middle of the stadium. This flitted between players, and ensured the audience didn’t miss a minute’s action. The spectator view hopped between all the different players and three commentators helped the audience make sense of the hectic action on the battlefield. I was surprised at how well this was done. The whole setup was very professional, thanks to the excellent spectator tools the developers had implemented.

At the end of the day I got the chance to interview some of the teams. This lead to some interesting insights, mainly involving the differences between the different regions. The teams flew in from over a dozen different countries and every played I talked to told me that there’s a huge contrast between the tacts of the Eastern and Western teams.

North American favorites Gankstars and Wildcard are used to dominating their local tournaments, but found themselves facing a tough competition when they went up against their Thai and Chinese counterparts. The strategies employed by Eastern teams differ vastly from those used by players from the West, it turns out. For instance: Asian players played way more aggressively than the American teams, taking little time to loot the best weapons, opting to rush their opponents as quickly as possible instead.

The three American teams did what they could, but in the end they were no match for their Asian counterparts. The top three was dominated by Eastern teams, with Thailand’s RRQ Athena taking home the $200.000 prize and two Chinese teams taking the other two top spots, earning $100.000 and $50.000 respectively. Aside from some technical difficulties on the final day, the whole tournament was a big success with 60 million live stream viewers and nearly 5.000 attendees in Dubai.

It’s interesting to see how a game that launched in March grew to be such a powerhouse in just nine months. You wouldn’t expect a game on a tiny screen, with touch screen controls, to turn into a serious esport, but it has and it’s not going anywhere.

Feeling ambitious? You can grab PUBG Mobile for free on iOS and Android. Just let us know when you take home $200.000 next year.

Read next: How to save all your (NSFW) Tumblr content before it's too late