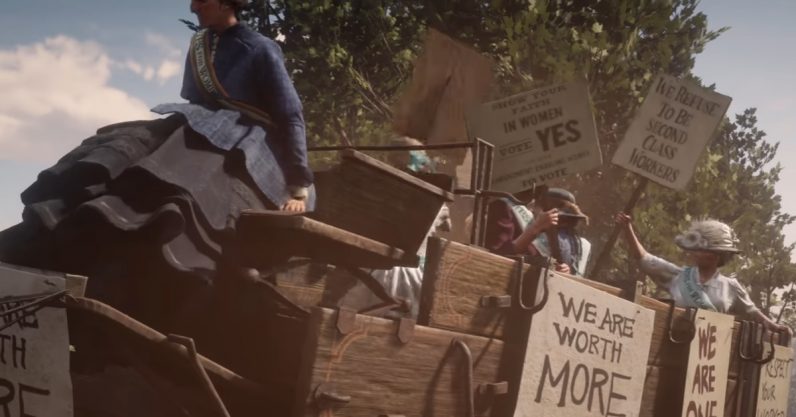 Players are increasingly resorting to violence against a certain female character in Red Dead Redemption 2. In this case, I’m convinced the problem isn’t Rockstar Games.

Rockstar games do not generally fall under the umbrella of what one might call “safe” video games. If you’re playing one, on average you might at any moment have already encountered a few different things that’ll turn your stomach.

Red Dead Redemption 2 already leans into that, to some respect. Take, for example, the skinning mechanic, which has evolved from an upshot of the character‘s face with a quick “shk-shk” sound to a realistic horror show where the main character sticks his hand down a raccoon’s butt and rips its skin off in one pull. Or the part where the main character rather gracelessly compares his life as an outlaw to that of persecuted Native Americans because hey, the government hates us both, buddy.

But the actions of some players with regards to a suffragette in Saint Denis is raising more than a few eyebrows. There’s now a series of videos on YouTube devoted to killing this particular character in ever-more graphic fashion. That, by itself, would be one thing, but the comments section is surprisingly vitriolic towards the character.

Motherboard has a list of some of the worst comments, and takes care to point out that the ability to kidnap and kill her was “something that the studio deliberately chose to put into the game” even though it’d removed the ability to partake of violence against children. It also quotes the YouTuber as saying he doesn’t necessarily agree with the comments, but doesn’t wish to remove them. The article’s writer, Emanuel Maiberg, also specifies he hasn’t finished the game.

I have — even wrote a whole story analysis — and I’m going to drop a few minor SPOILERS (for a side mission) here, so consider yourself warned: this is not the only place where suffragettes feature prominently in the story. There’s a mission in which Arthur has to protect a plot-important character who is also campaigning to give women the vote. Arthur, no matter how negative his outlook up to that point, seems at least marginally sympathetic to their cause — more so than the woman’s fiancee, at any rate. And the things that are shouted at the suffragette leader are nothing short of vile.

Then, in the final chapter of the game, there is an optional side mission to speak to the young woman again. She tells Arthur she’s finally escaping her family, who were part of the anti-suffragette protests. The reason? The suffragette leader to whom she looked up was murdered, probably by her (the young woman’s) family. Arthur then has the option of helping her and her squeeze flee to the North, where her ideals will be welcomed.

Having played this part, I find it rather difficult to believe Rockstar is insensitive to the plight of feminist leaders at the time considering this is part of the story (meaning, not based on anything the player can do) and is treated with horror and disgust by Arthur and the young lady.

There are also a few mutterings from male characters in-game at the character of Sadie Adler, a fierce, pragmatic warrior woman who, it is pointed out, doesn’t wear feminine attire. But it’s consistently made clear in the game that Adler couldn’t care less what anyone thinks of her, and neither Arthur nor anyone in the gang (except resident asshole Micah) so much as says “boo” to her on the subject.

Rockstar allows an unbelievable amount of latitude with regards to what players can do in its games, with limited exceptions. For example, the things you can do to the suffragette? You can also do those things to a disabled veteran, a former slave, and any number of women and men of varying professions. The fact that people with a nasty frame of mind are targeting one particular character seems to me more a comment on them than it does on Rockstar.

A rep for Rockstar declined to comment on this story.

Read next: China has a new surveillance tool that identifies citizens by how they walk