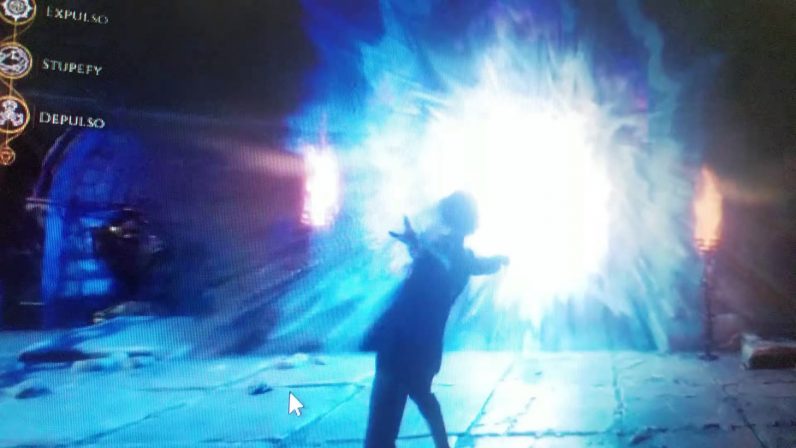 UPDATE: The original video we shared isn’t online, because Warner has been taking down YouTube footage. You can still see the leak in this tweet though:

Thank you lord for this leaked footage of a Harry Potter RPG. It has brought purpose to my insignificant life.

The footage was found on Reddit and reported on by Press Start. The video itself was posted to r/gaming by a user called VapeThisBro (sigh).

They didn’t just post the video though. They also included this description of the game (we’ve kept the original spelling):

Set in the 19th Century (1800’s) Wizarding World, this 3rd person open-world action RPG game centers around your character with unique abilities who has eared a late acceptance to Hogwarts School of Witchcraft and Wizardry. You are a newly arrived 5th year student to Hogwarts that demonstrates a latent gift for magic with a unique ability to track and identify remnants of a pottant ancient power.

Upon arrival, strange events begin to materialize In the Forbidden Forrest and trouble begins o brew within the castle walls. Together with Professor Elezar Fig, you embark on a journey through both familiar and never before seen locations to bring to light the truth behind these mysterious occurrences.

On your quest you will craft potions, master new spells, and discover fantastical beasts. You will battle Dark Wizards, Goblins, and other supernatural enemies and uncover the truth about your destiny – the Fate of the Wizarding World lies in your hands.

Journey to Hogwarts to become one of 8 different Wizard types -Experience Hogwarts, make new friends, uncover new secrets, and change the fate of the Wizarding world. -Experience a new magic system that creates countless possibilities to master magic. -Freely explore the Wizarding World for the first time. Choose your house and friends at Hogwarts, and decide to pursue a path of good or evil. -Create your own witch or wizard, and experience a all new story separate from the books or films

Is this Harry Potter RPG real though?

Well, the above text could quite easily be fake, but I think the video itself is authentic.

Yes, part of that belief is the Agent Mulder “I-want-to-believe” school of thought, but this video has enough scenes and set pieces to make faking it incredibly complex. I’m not saying that it’s beyond someone, but it’d be a mammoth undertaking. And for little pay-off.

For the moment, let’s just assume that it’s real.

So who’s making it?

Well, there’s some confusion over which development studio is making the Harry Potter RPG.

In the Press Start piece, the author alleges that Rocksteady – the team that made Batman: Arkham Asylum – are creating it. But industry insiders on the Reset Era forum believe it’s being made by Avalanche Software, the business who made the Disney Infinity games.

What lends some substance to this claim is that Warner (which hold the Harry Potter license) bought Avalanche Software (not to be confused with Avalanche Studios, who are the crew behind the Just Cause games) in January 2017. So, it kinda fits.

On top of that, they also posted this job opening:

If that doesn’t sound like a Harry Potter-centric job, I don’t know what does.

Look, we might not know for a little while whether this game is actually being created – let alone its release date and what platforms it’ll be on.

But, what we do have though is this sweet, lovely video. So, let’s just watch it once more time and bask in its unadulterated glory.

Read next: Will blockchain be able to solve the post-Brexit Irish border problem?