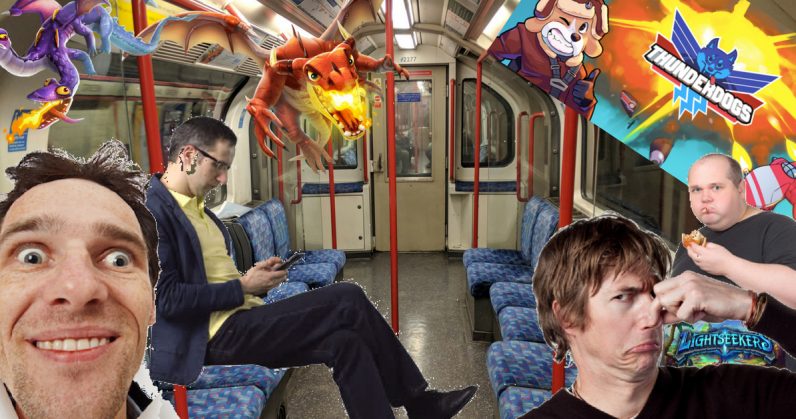 We all know the feeling… you’re on your usual commute home from work, looking forward to zoning out or getting in some quality time with your phone, when suddenly, the smelly person sitting two seats away starts up a conversation.

What do you do? Our suggestion is avoiding eye contact while booting up any of these four fantastic Android games till they stop talking. Will it be awkward? Yes. But will it work? I guarantee it!

It works offline, its in-app purchases aren’t annoying, and it features fire-breathing dragons in an expansive 2D world filled with interesting enemies and edible creatures. Wait, did Ubisoft just create an amazing game?

Built around the core gameplay that made Hungry Shark a smash hit, this title swaps undersea combat for a chompfest in mid-air. That hit home with my inner fantasy nerd, and made for several fun rounds through this entire week.

You can unlock more powerful dragons by leveling up existing ones, and pick up new helper pets from dragon eggs – all at a decent pace with a dead-simple control scheme. That ensures constant entertainment for even those really long bus rides. Just remember to watch out for your stop, because it’s all too easy to lose track of time with this title.

Get Hungry Dragon on Google Play.

Although not fully released yet – which means we aren’t sure about its monetization and overall level system – Grand Mountain Adventure seems poised to become a top skiing adventure sports game for mobile devices.

In the open beta that’s currently available, you simply tap and swipe to steer and perform quick turns, as you automatically race down tricky slopes in an open world seen from a unique top-down view. That makes for surprisingly deep and delightful gameplay.

The art style, aesthetics, and open world with hidden collectibles and treasures come together to create a game that’s greater than the sum of its parts – a must-try for the low price of free.

With its great pixel art and intense real-time multiplayer “.io”-style dogfight combat, Thunderdogs is a great take on both the .io and air-battle genres. The title sees you take command of your own aircraft, shoot down enemy planes, and loot their dog treats to ultimately become the “king” of the server.

There are plenty of interesting planes, upgrades, and skins to unlock, which happens through a loot box-like system that you can spend in-game gold or real currency on. Plus, you’ll find a wide range of badass weapons in battle to add to your arsenal.

Get Thunderdogs on Google Play.

It’s a combat-style TCG that requires players to use their two actions per turn wisely, choosing between normal attacks and combos. But the game’s main differentiating gameplay mechanic is the “turn,”, which has some cards do damage, heal, or buff over time, with the cards turning 90 degrees on every turn (check out the video above for an example of how that works).

This mechanic adds an intriguing strategic layer to the game, and will keep you coming back for more rounds than you’d expect to play in a single sitting. However, it’s worth noting that unlocking new cards through in-app purchases can get rather expensive, and buying them with gold requires a lot more grinding than you might want to bother with.

Get Lightseekers on Google Play.

That’s all for this week, but be sure to tune in again next Friday for more sweet games. Happy commuting!

Read next: Line launches its own cryptocurrency and blockchain network