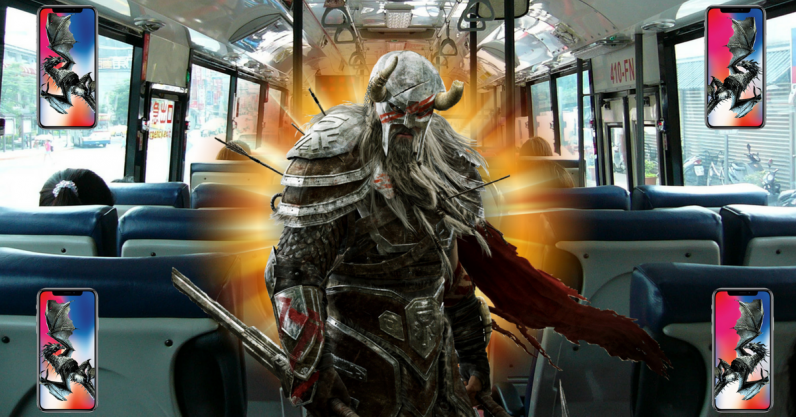 At this year’s Gamescom in Cologne, we got the chance to play a demo version of the upcoming mobile game from Bethesda, The Elder Scrolls: Blades.

Anyone with a passing interesting in gaming will know The Elder Scrolls series. Hell, Skyrim – released first back in 2011 – is still getting ported to new consoles, something that doesn’t look like it’s going to end anytime soon.

Still, despite the series’ success, it hasn’t had a mobile version, until now. Available near the end of the year, The Elder Scrolls: Blades will be free to download on iOS and Android.

In other words, you can guarantee that there’ll be some hefty in-game purchases available.

So, what’s the The Elder Scrolls: Blades about?

Well, according to Bethesda, it’s going to be a first-person combat RPG with a multiplayer element. You’ll hack and slash your way through a single player quest (which I assume will be a standard fantasy affair), while also having the option to build a city.

Throughout this journey, you’ll also have the chance to create and mould a character as you see fit – something that will come as no surprise to veterans of The Elder Scrolls, which lets players choose the race and abilities of their chosen character.

Bethesda also will include an aforementioned online multiplayer mode as part of The Elder Scrolls: Blades, allowing you to take on opponents in one-on-one battles.

Well, bear in mind that I only played a demo version of the game for about half an hour.

And it looked amazing. I played The Elder Scrolls: Blades on an iPhone X and was blown away by the quality of the graphics. In my memory, it looks as good as Skyrim did when it came out on the PC. Maybe even better.

Well, this is where I felt slightly let down. You navigate the world by clicking on the floor in front of you. Then, when you move your finger across the screen, you character looks around.

Personally, I’d have preferred a floating D-pad to move though, as it’d make the game feel more immersive.

The world of The Elder Scrolls: Blades was fun to walk around, but it feels far, far more limited than the open world of other titles in the serious, as you follow a linear path, rather than explore a gargantuan world.

That’s fine with me, you said this was a combat RPG, not an exploration simulation

You’re right. But, I didn’t find the combat much to sing about either. To attack, you hold your finger on the screen. A red ring appears and, when it goes gold, your character strikes. You also have a shield icon with which you can block your opponent’s attacks.

I’m confident the combat system will become more sophisticated in time (there are 3 bars at the bottom of the screen, one for defensive spells, one for health, and one for a shield charge that I guess will become more important in the full game), but I found the demo mainly involved me just blocking and slashing.

I will say this though: it was amusing striking down goblins and skeletons, and teaching them to fear my steel.

What do you reckon then?

I can say this for certain: when The Elder Scrolls: Blades is released, I’ll be downloading it. At worst it’s going to be some light, violent entertainment. But at best? It could be the mobile RPG experience we’ve all been waiting for.

So far, it might look like it’s trending towards the former, but Bethesda do have a strong track record in creating wonderful games, so don’t count them out just yet.

Read next: Build the perfect business plan with Upmetrics and save over 90%