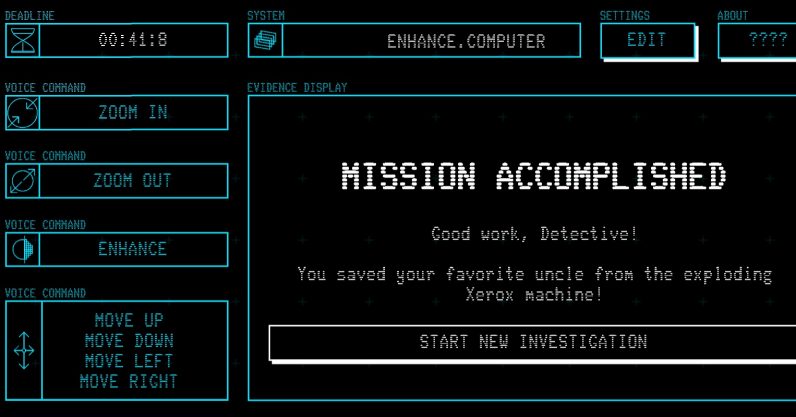 You know those evidence-gathering scenes in 90s and 00s tv shows and movies that treat looking at photographs like a particularly shouty spectator sport? Where stern-looking people tap magical “enhance” button or tell the computer they intend to zoom in and “clean up” the image? You know, that old chestnut?

Someone made a game out of that.

I made https://t.co/jTDvjrm9az, a cyberpunk game you play by yelling at your computer like you're in a movie. It's an homage to the classic sci-fi "zoom and enhance" trope.

Play it in Chrome!

The game is called Enhance.computer, and it’s a browser game in which you yell commands at your screen to direct a photo-examining program. Shouting “enhance” clears some non-specific static off the image, because you have to have an “enhance” command in there somewhere.

It might take a few tries to get it to work. I had to refresh the game several times to coax it to move off of the loading screen and into the actual game. Also, for those of you not used to using a microphone with a browser, make sure you’re using the right one — when I first tried to shout, I discovered Chrome was detecting a microphone which doesn’t exist.

Your character is called “Detective Cyb3r” and you are tasked with finding a code in a picture which will avert Nonspecific Disaster. To do so, you holler commands at the program to “Enhance,” “Move Left,” and “Zoom In/Out.”

Okay, I have a few questions. Am I some sort of futuristic forensic photographer? If we have a nuclear aversion code, why did someone embed it in a picture? Why does this computer program care if I have a New Zealand accent or not?

By the way, that last question is easily answered — it doesn’t. The game gives you the option of selecting the accent closest to your own so that it better understands your commands, but when I selected “British” to test it out, it still would only respond to my American accent. Either my British accent is just that terrible, or the game doesn’t actually give a shit.

Enhance is the work of Nicole He, a New York-based programmer who’s made numerous other experimental games. She’s worked with AR, robots, and Soylent phalluses, so this seems relatively tame for her.

Also, this game is unexpectedly hard. You only have a few seconds to find and enhance the image enough to find the code. I’ve played several times in the course of writing this, and only managed to snag a win once, out of dumb luck. Whether that’s a commentary on my extremely poor eyesight or the relatively cumbersome method of using one’s voice to navigate, I leave it for you to decide.

Read next: Report: Apple may launch a new MacBook Air in September or October