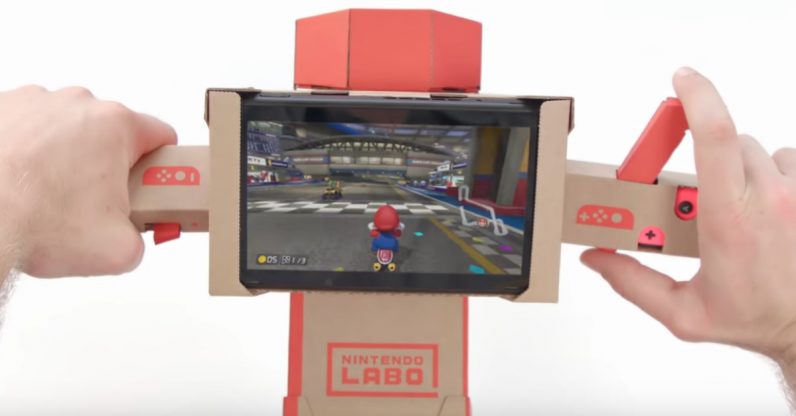 Nintendo finally joined its niche Labo side project with its main library today by adding support for it in a major Switch game.

The details: The new upgrade lets you use the Labo Motorbike controller with Mario Kart 8 Deluxe on the Switch. Specifically, you can now ride the Toy-Con, the RC car from the Labo Variety Pack, in the game. You use the Labo the same way you’d use an arcade controller — twist the throttle, lean the handle to turn.

Nintendo’s also holding a Labo creator’s contest, encouraging players to create a Labo-based musical instrument and “gaming experience.” Winner gets a custom faux-cardboard Switch. The contest begins in July, meaning you now have two reasons to own Labo that you didn’t before.

What makes this so special: Mario Kart 8 Deluxe is the first Switch game to get Labo support, and it might finally bring this odd little cardboard-based project into the mainstream.

Labo is a strange cookie even by Nintendo standards. Announced earlier this year, these cardboard kits look poised to make the Switch a viable toy for creative children. But it’s not something you’d picture being in the library of Nintendo’s legion of adult-aged gamers. It wasn’t made to appeal to them.

But by adding Labo support for one of its most popular games, Nintendo may be trying to bridge that gap. Mario Kart 8 is a wise choice in that case, as it’s the second best-selling game for the Switch at last count.

Labo support is available to everyone as a free upgrade to Mario Kart 8 Deluxe today. If you don’t already have Nintendo’s officially licensed pile of cardboard, then my colleague Callum might have a solution for you.

Read next: Google Home now works in Spanish as it launches in Mexico and Spain