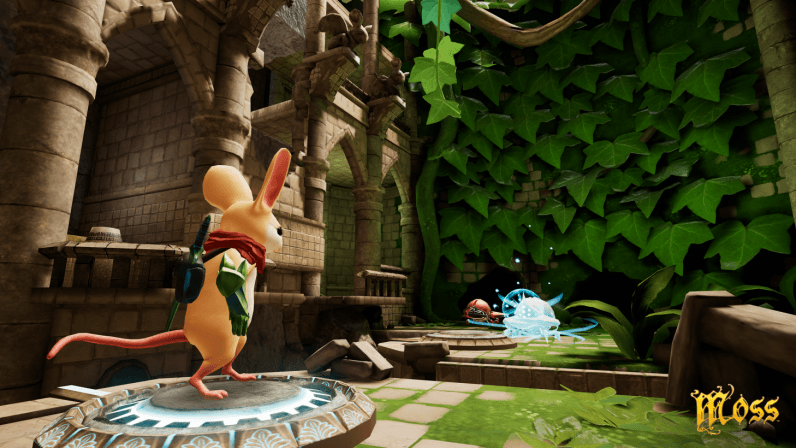 Polyarc Games today announced the launch of a PC port for its critically acclaimed Moss, available now for HTC Vive and Oculus Rift.

It’s finally here: Polyarc Games released Moss back in February, but it was exclusive to PSVR. Gamers outside of the Sony ecosystem have been forced to bide their time waiting for the PC port, until now.

And we’re happy to report that it was worth the wait. Not only is Moss an amazing combination of the puzzle and adventure gaming genres, it also features both first and third person exploration. Perhaps the biggest draw of Moss, and the reason why it’s one of the highest rated VR titles to date, is its fantastically compelling story and Quill, the amazing little mouse you’re likely to fall in love with immediately.

What’s new: The game remains largely unchanged – the PC version supports multiple save profiles without logging in and out of Viveport, Steam, or your Rift account – but the platform makes all the difference.

The Vive and Oculus headsets have a much larger field of view than Sony’s, making it easier for players to see what’s going on. This allows for a far deeper, closer, more immersive experience than can be achieved with the limitations of the PSVR system.

But, if you’re looking for the best possible Moss experience, you’ll need to play it on the HTC Vive Pro. The combination of 3D spatial audio and noticeably enhanced graphical fidelity make it a mesmerizing and fantastic experience.

We asked Joel Breton, HTC VIVE, VP Global Content what he thought about the arrival of Quill, he said “Having a high-quality, tailor-made VR title such as Moss launch on Vive and Viveport signals to the broader gaming community that AAA gaming is here and continues to grow for Vive.”

The verdict: Moss is one of only a handful of VR-only titles that could hold its own with any other game (VR or not) on the market. If you haven’t had the chance to play it on PSVR, and you own a Rift or Vive, you should definitely consider getting it.

You can purchase it today for $29.99 on Steam, in Viveport, or through the Oculus Store.

Read next: Hands-on: The BlackBerry Key2 has me unreasonably excited for a physical keyboard