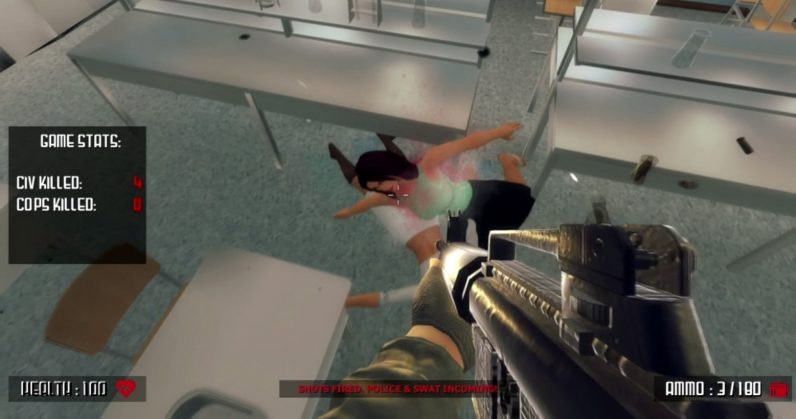 Acid, a Russian independent game developer that publishes titles on Steam, is set to release Active Shooter, an FPS that simulates a school shooting incident. It allows you to play as the shooter or a SWAT team member tasked with neutralizing the perpetrator.

It’s not the first game to attempt to tackle this difficult topic, and yet it’s drawn ire from the Steam community, as well as a UK-based nonprofit, and 180,000 people against the title. But they’re asking the wrong questions about it.

“Why would anybody think it’s a good idea to market something violent like that, and be completely insensitive to the deaths of so many children?” ponders a spokeswoman for well-meaning London-based charity Infer Trust who spoke to the BBC; the organization also called on Valve to take down the game. A Steam user took to the title’s discussion forums to ask the developer, “Why was this even made? What point are you trying to prove?”

Violence isn’t new to games, or to most media we’re exposed to on a daily basis, and we’re no longer offended by violent content that we’ve been hearing about for centuries. Neither are the debates about whether violent games are bad for society.

The real problem with a game like Active Shooter is how it appears to be completely devoid of context – before, during, and after the fact. Shootings don’t occur as randomly and spontaneously as firing up a level in a video game; there are several factors that contribute to these incidents. There’s nothing in the description of this ‘SWAT simulator’ that might urge players to consider some of the circumstances that lead up to school shootings, like the issues of access to mental healthcare and counseling for adolescents, gun control, and bullying in schools.

There’s no mention of moral consequence for the player, regardless of the outcome of their game. Do you ever really ‘win’ in a school shooting? In Acid’s title, you’re only ever encouraged to ‘protect and extract or hunt and destroy.’

Similarly, there doesn’t seem to be a choice for the player in the shooter’s role to rethink their decision to target innocent victims, or to surrender at any point during the attack. Without these options, a game like this will only serve to normalize such violence – even though the developer says his intention with the title ‘isn’t to promote any sort of violence.’

From what we can see, Active Shooter is a SWAT simulator in the basest sense, and is in poor taste given its design (or the lack thereof) and approach to a deeply concerning issue plaguing America. It appears to be an attempt to profit from the tragedies that scores of families face across the country on an all-too-regular basis, and an artless one at that.

Update (May 30, 2018): BBC reports that Valve has removed Active Shooter from Steam.

Read next: Here's why Google employees meditate before and after meetings