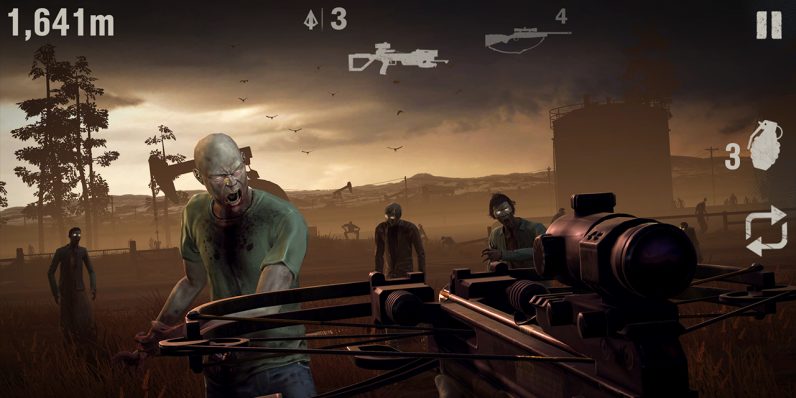 Most free-to-play mobile games aren’t much fun until you actually spend some money on them. But PikPok’s latest release brings plenty of gory entertainment to your fingertips without requiring you to spend a dime.

Into the Dead 2 is the sequel to one of the best zombie shooter titles ever, and adds just enough new stuff to improve on the original without diluting what makes the game great. It’s an endless runner that sees you dodge, weave and shoot your way through hordes of undead as you make your way back to your family from a wrecked vehicle miles from home.

While the gameplay largely remains the same as in the first title, Into the Dead 2 introduces a bit of storytelling in the form of a chapter-based stage format, and simple cutscenes at the end of each level that give you an idea of how your character and his loved ones are doing.

Combine that with slick graphics, a dead-simple control scheme, and a variety of new weapons and game modes to try (there are daily challenges which let you try guns you don’t own yet, as well as a survival mode to test your skills), Into the Dead 2 is satisfying and addictive.

It’s not just about grabbing a gun and blasting zombies: you also have to keep an eye out for ammo drops (which aren’t always easy to get to), keep an eye on how many bullets you have in the chamber (it’s all too easy to die while reloading) and attempting to cheat death when you’re out of ammunition by deftly avoiding the walking – and sometimes running – dead.

Since it launched yesterday, I’ve found myself firing it up whenever I have a couple of minutes or a half hour to kill – and while it’d certainly be nice to score more loot by ponying up real money, I don’t really feel the need.

The title surfaces deals from time to time, but these aren’t particularly intrusive, and there are plenty of opportunities to score new weapons and items simply by playing. That said, if you’re spending a lot of time in the game like I am, you might want to consider supporting the developers by buying something that’ll increase your enjoyment.

Take a crack at wiping out some zombies by grabbing Into the Dead 2 for Android and iOS.

Read next: 11 ways to use data for better team engagement