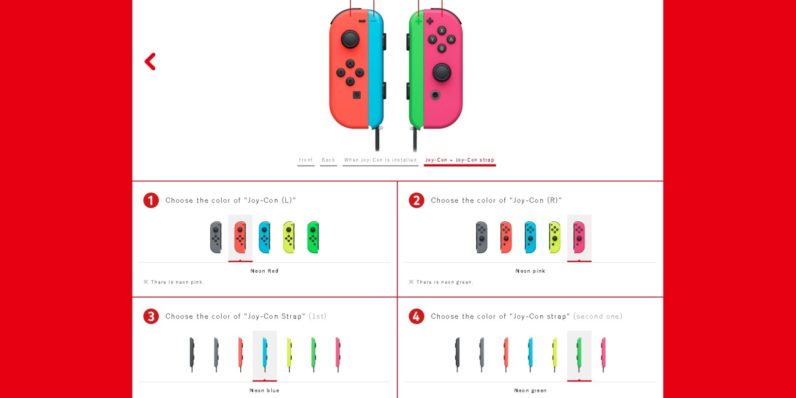 Nintendo just launched new options for online Switch customers, allowing them to customize the color of their Joy-Con and accompanying straps — up to a point.

The page is on Nintendo’s Japanese store, and hence is in Japanese. I apologize for any translation errors — I’m relying on Google for the information.

Each of the Joy-Con and straps come in the color of your specification, as long as it’s a color the company has already produced. Want to mix and match Splatoon Pink with Neon Yellow? Now you can (if you want to blind yourself).

Your options are also somewhat limited — for example, Splatoon Green doesn’t appear to be an option for right controllers, but it does for left. The opposite is true for pink. This aligns with how the colors are laid out on the Splatoon 2 version of the console.

Still, it’s a nice concession to customization from a company that hasn’t really offered much in the way of options up until now. It’s not quite as good as a Scarborough Fair Xbox Controller, but it’s a start.

At the moment, this is only available for Japanese customers, but there’s always a chance it will roll out to other regions as well. Hopefully the recent legal dispute over the Joy-Con doesn’t get in the way.