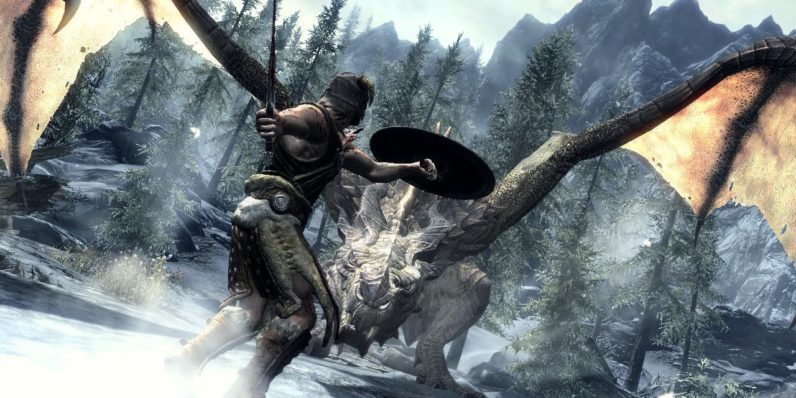 In case you were lucky enough to miss Bethesda’s tepid showing at E3 2017, blockbuster RPG The Elder Scrolls V: Skyrim is getting yet another re-release. This time, it’s coming out, at least in part, in VR.

If this were the first, or even the second time that Skyrim has resurfaced, I might not bat an eyelash. But since its release in 2011, it’s been re-released three times: for current gen consoles in 2016, and VR and Nintendo Switch this year.

Hey Bethesda? I’d love to see you pack Skyrim away on a trophy shelf somewhere and move on to brighter new projects. For all its virtues, Skyrim is a relic, and has no business going back on the market for full price.

Bringing Skyrim into virtual reality isn’t, in and of itself, a bad thing. VR is a burgeoning industry and needs an accessibility boost. It could be a point of entry for gamers who need more than tech demos to invest in a headset. The idea that some day you’d be able to wander the entire northern province of Tamriel in VR is a dizzying prospect.

Skyrim would also be more interesting in VR than, say, Fallout, because Skyrim has more air-based enemies like dragons, giving players a good reason to crane their necks skyward. The game also already has first-person perspective.

If all things were equal, Skyrim would be an ideal candidate for re-purposing in VR. But given how much time in the limelight Skyrim has already had, this feels like an extension of an already-painful milking from Bethesda.

Skyrim is such an odd case in the annals of gaming, considering not even the other games in the Elder Scrolls series were popular enough to warrant this level of focus and attention from their creators. Even the Fallout games aren’t getting this much love.

It makes sense, in a way. The game is one of the best-selling of all time, rivaled only by Call of Duty, Grand Theft Auto V, and Nintendo products. The game has paid for itself and then some.

But I would have thought this unparalleled success would give Bethesda space to work on other projects, and leave the reinvention of Skyrim to the modders. Scoring a touchdown doesn’t give you license to dance in the end zone the rest of the game.

Don’t get me wrong: I like Skyrim. It’s a decent RPG with a fun story and side missions. But I don’t think it has the kind of replay value necessary for me to buy it on four different systems.

For me, the game’s Achilles heel is its refusal to lock the player into a role in any way. In Skyrim, all of your options are open from the word go. You can pick any collection of skills, weapons, and armor, unconstrained by traditional role-playing game tropes such as playing a role.

Want to go stealthy and join the Thieves Guild? Done, just head to Riften. Get a taste for blood and want in on the Dark Brotherhood? They’ll be waiting. Go knocking at the door of the noble Companions, in spite of the fact that you’re now Listener for the Brotherhood and Nightingale with the Guild? They’ll welcome you with open arms and never question you about other commitments. It’s a wonder the Dovahkiin has time to eat — not that they have to, because the game doesn’t have survival mechanics.

My point is that Skyrim doesn’t try to constrain you. That makes it fun to play, but not so much when it comes re-playing. Last I checked in on my character, I was Thane of all nine holds, had sworn myself to every Daedric Prince, and taken over every criminal enterprise short of becoming captain of a pirate ship. Why would I ever go back and start a new playthrough, considering I’d be doing all the hundreds of hours of sidequests over and over again?

I can’t go without mention the current lifeblood of the game: mods. I’m convinced that mods are at least 80-percent of the reason why anyone still plays Skyrim, and I’m being conservative. I’m not immune to it, either — at least 100 hours of my time in the game were while it was modded to the point of being unrecognizable.

I find it very telling that some of the most popular mods for the game remove the central motivation of the game. One of the top mods for the PC and Xbox One versions of the game lets you live another life inside the game world, skipping that whole pesky business of being the destined world savior and dragon soul eater.

Other mods let you go through the otherwise-nonexistent process of selecting the type of class you want to play, each with particular skillsets typical of the role. In other words, you can download a mod that will give you the ability to role-play — in a role-playing game.

Imagine if, instead of Skyrim for $60, Bethesda released a different, Switch-exclusive RPG. It wouldn’t even have to be from The Elder Scrolls series — though it’d be thrilling if it were. Or imagine the VR version was a short demo set in a thus-far unexplored region of Tamriel, like Black Marsh or Elseweyr.

This is a problem I’ve had with the gaming industry in general for years. Games seem to be constantly rereleased, drops of blood extracted from their bodies until they’re downright anemic. But Skyrim has been rereleased four times in six years, which is extreme even for this industry.

Let me be clear (again) that I’m not bashing Skyrim because I dislike it or think it’s a bad game. I’ve logged hundreds of hours in it, and I enjoyed most of them.

But it’s just one game. No game on the planet deserves this many bites at the apple, at least not without more meaningful overhauls than what it’s received.

Read next: TRVL is the best travel platform you're not using (yet)