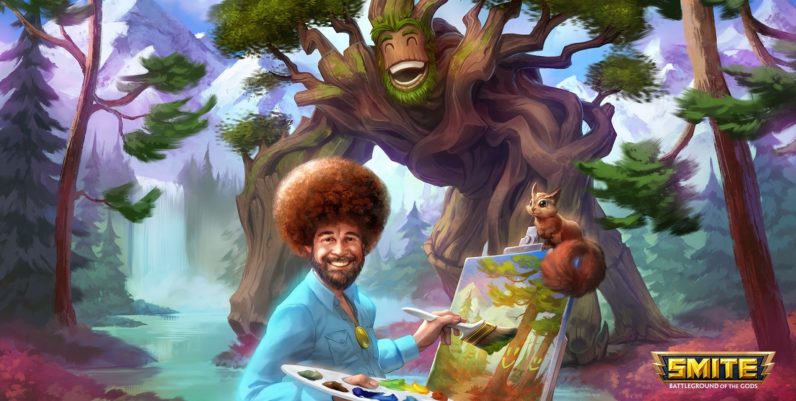 Hi-Rez Studios, makers of multiplayer game SMITE, have announced that mild-mannered painter Bob Ross will be joining the game, proving they know how to appeal to a Twitch audience that adores Ross.

If you know nothing about the culture on Twitch — and hell, even if you do — this will be completely confusing. Bob Ross became a Twitch icon twenty years after his death when the site aired a marathon of his show, The Joy of Painting, to promote the new Creative category. He joined the ranks of Twitch emoji, has his own channel, and has become an enduring staple of the site.

Now he’s becoming part of SMITE, a game where characters battle as gods of all cultures and another fixture on Twitch. At the time of writing, there were dozens of live channels playing the game. Twitch streamers are an important demographic of SMITE‘s players, and this is obviously targeted directly at them.

Ross will be a new skin for the character Sylvanus, a Roman nature god who normally rides on the back of the tree-like Grover. Ross takes his place, much to the delight of Grover, who becomes quite the “happy little tree.”

The bundle which includes the Ross skin will be available for $9.99 on May 9 for PC, and May 16 for consoles.

Read next: Speedrunner's Mario record smash earns him a hug from grandma