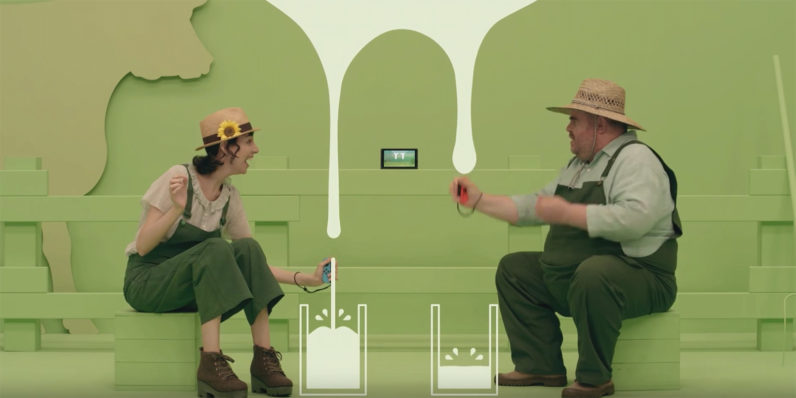 If milking a virtual cow sounds harmless enough to you, then you must be new here. In 2017, everything’s offensive, even the innocuous act of deriving dairy from a fake cow.

The People for the Ethical Treatment of Animals (PETA), an organization which itself has come under fire for animal cruelty, has taken issue with one of Nintendo’s launch titles for the Switch. 1-2 Switch, which our own Napier Lopez got to take for a spin prior to the console’s launch, features a minigame that allows players to milk a virtual cow.

In a letter to Nintendo from PETA founder Ingrid E. Newkirk, the organization took issue with the lack of realism in a game designed as much for gameplay as it is for making you look like an idiot.

Our staffers and activists have recently played the cow-milking minigame for Nintendo Switch and realized you’ve taken all the cruelty out of milking. We have more than 35 years of experience investigating dairy farms where cows are exploited for their milk, and it is NEVER that pleasant for these animals. Can we have some realism here, please?

Whether or not you agree with Newkirk’s message, you have to be at least a little concerned with someone willing to wage a faux war with a company that didn’t make much of an effort to present the game in any sort of realistic way. This isn’t a VR cow milking simulation (although now I can assure you one’s coming), and there aren’t even any cows shown on the screen during the milking process — only during the game’s start screen, and a stationary cow grazing while it’s calculating the totals.

What Newkirk is doing is the same thing PETA has drawn criticism for in the past, being outraged for the sake of being outraged. Not to mention it’s a hypocritical stance for an organization known for euthanizing more than 90 percent of animals it “rescues.”

This is the point where PETA argues “no we don’t” and I save you from the bullshit by pointing out just one of dozens of complaints against PETA from inspectors nationwide, this one from the Virginia Department of Agriculture and Consumer Services. You can read the full statement from the inspector here, but let’s just dive into the good bits:

PETA, for all intents and purposes, is a shitty organization that masquerades as the protector of animals while killing nearly all of them it rescues. “They were sick, injured, or unadoptable,” are common PETA retorts when faced with this information, but evidence exists to the contrary. Even a veterinarian who naively turned animals over to PETA for rescue testified that they were “healthy” and “adoptable” after finding out they’d been euthanized.

I only mention this to point out the hypocrisy of being outraged over a game that features fake cow milking.

Personally, I think the fake outrage has served PETA well. How else do you get an organization that provides minimal impact to the well-being of animals in the news repeatedly? In this case, though, I think insinuating Nintendo is somehow harmful for animals due to 1-2 Milk — its truly terrible minigame — is perhaps a bit oversensitive.

Now, if you want to criticize the game for being god-awful, I’m all for it.