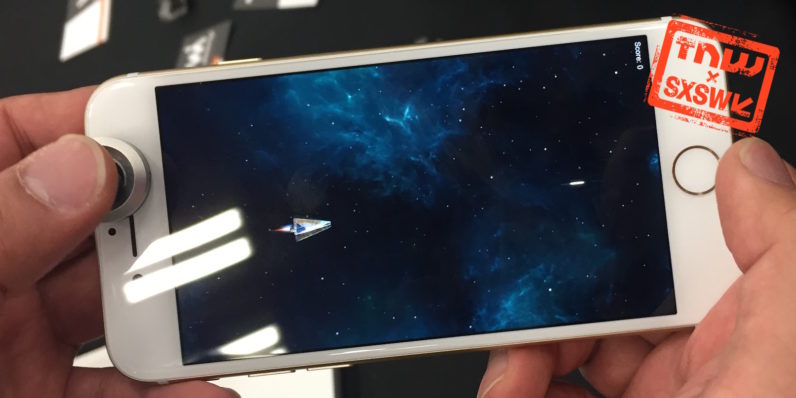 The joystick is one of gaming’s most beloved controllers, and now you can use one directly with your phone, no plugs or Bluetooth necessary.

MotionPlay is a small phone attachment, made by Widevantage, which functions like a tiny joystick. It uses magnets and software, requiring no direct connection to the phone. Just attach it to the side of your phone and it’ll work automatically… provided you’re using a game that supports it.

Widevantage also makes a VR headset with a similar joystick, which also requires no cords and can be used just by sticking a phone into the Google Cardboard-like headset…again, provided you have a compatible game.

Why is it useful?

There are, of course, several kinds of phone attachments that provide haptic feedback and control mobile games, but most of them need to be tethered to your phone, either through a physical cord or via a Bluetooth connection. The mfotionPlay requires neither of those things.

It’s also useful for those who want to game on their phone without having a complex control scheme laid over the game. Phone screens don’t exactly have a lot of real estate to begin with. Also, phones aren’t really capable of providing physical feedback by themselves outside of vibrations.

Widevantage is looking for partners to integrate with existing hardware or games, though CEO Jaeyong Koh told me the software would take an hour of work to incorporate with most mobile games.

Regardless, he plans to release the motionPlay in a couple of months for about $15-20 in the US and Korea.

Read next: Can you guess what this tech startup does based only on the name?