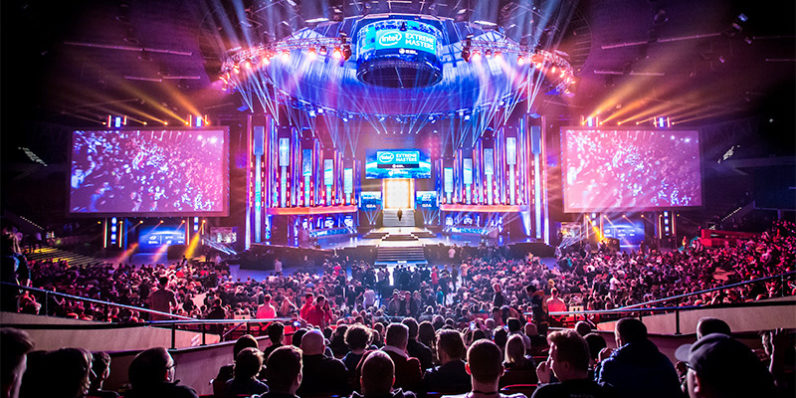 The Intel Extreme Masters (IEM) tournament is one of the most prestigious esports on the planet. It sees the world’s top players of StarCraft 2, Counter-Strike: Global Offensive and League of Legends come together to compete in Katowice, Poland for the prized cup. For season 11 this year, the tournament played host to 11,000 spectators a day over two successive weekends at the Spodek stadium, and millions of fans who streamed the event remotely (the organizers estimated 35 million viewers last year).

The Spodek stadium in the small gaming-crazy town of Katowice (population: ~300,000) is the largest venue of all the IEM competitions (it also takes place in Shanghai, Oakland, and Gyeonggi in South Korea). It’s the first esports tournament I’ve ever attended and I was blown away by the immense scale and finesse of the event. Naturally, I snuck backstage to find out how the organizers arrange a massive gaming extravaganza like this.

I met with Bastian Veiser, the senior product manager for IEM, who mainly oversees the production of the event. Veiser explained that the largest part of the puzzle was the internet connection that facilitates streaming all the video feeds from the concurrent matches across four different stages to the cloud.

To make it happen, the IEM crew partners with a global ISP that can provide fiber lines anywhere in the world for events like this. In total, 9.3 miles of fiber is laid down at the venue to bring IEM’s systems online; multiple connections supplied by a handful of vendors ensure that there’s always a fallback in cause of failure. Veiser explained:

There are four 1GB lines, along with several smaller lines in the 100Mbit range, for streaming footage into a media cloud that distributes the signal to every channel that needs our feed, including linear TV.

Next, the venue needs to be set up. Vesier works for an entire year for each season of IEM with a team of more than 1,000 people in total who handle everything from managing logistics to setting up on-ground infrastructure.

While planning takes up most of the year, he begins getting involved with the legwork five weeks in advance, along with a crew of 350 people who set up the entire venue, including the stadium and 8,300 square meters of exhibition space at the neighboring International Conference Center building, in just 72 hours.

Sounds insane? Vesier says that it doesn’t make sense to hire out the venue for longer than that because of the massive costs involved. “We can actually go bigger in three days if we needed to.” That includes the entire stage and crowd-facing digital displays, the backend for video production and streaming, sound and lighting, networks, exhibitions, as well as fiber lines and Wi-Fi.

As for the gaming events, Intel supplies 270 identical top-of-the-line PCs with the latest hardware (including components from co-sponsors like HyperX) on the market, each of which would cost at least about $1,700 – and that’s just the CPUs. Interestingly, there’s no real-time diagnostics system that’s used to monitor the PCs for issues and failures; if there’s ever a problem with any of the pro gamers’ computers, it’s simply replaced with another one immediately.

In addition, Vesier and Co. have custom-built a communication system on top of TeamSpeak to allow players to talk to each other. “It’s configured so it can’t be messed with by players, feeds into our audio system and is more reliable than the standard software package,” he said.

Even with so much to coordinate and manage, Vesier says his team has never had a major technical issue at IEM tournaments. The only problem they’ve had to deal with was a gaming PC that malfunctioned at this year’s event when a player installed the wrong software with their SSD, which they weren’t supposed to.

It’s likely that IEM season 12 will be even bigger, but Vesier is keeping mum until Intel makes an official announcement about it in the near future. I, for one, can’t wait to see what 2018 has in store for the tournament.

Read next: 5 strategies to survive in a burgeoning market