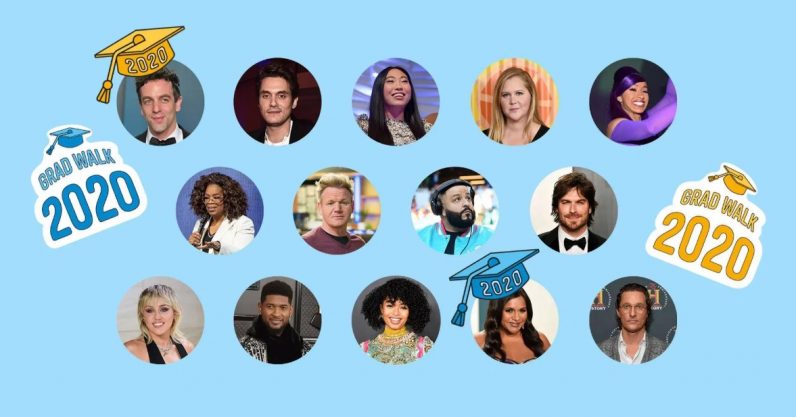 Facebook today revealed it’ll be rolling out a week’s worth of events, both on its platform and on Instagram, to celebrate the graduating class of 2020. The week will culminate in a virtual graduation ceremony featuring a celebrity cast. Here’s what you can expect to see.

It’s time to celebrate the class of 2020.👏 Let’s hear about the amazing grads you’re cheering on this year! 🙌 #Graduation2020 #ToTheClassOf2020 #MoreTogether pic.twitter.com/AhGBdMLn8g

Instagram‘s already kicking off the week with some grad-themed stickers, which are available right now. There’s a countdown sticker that reminds users of the big event on Friday, as well as cap filters so graduating students can see themselves in a mortarboard. Instagram is also introducing two hashtags: #GradPhotoChallenge and #GradMessagesChallenge, which will feature users’ senior quotes. Facebook, for its part, begins its Student Spotlight series honoring exceptional graduates of the year.

Facebook will share Grad Walks on its Facebook app Page’s Stories. It encourages users who want to participate to share their own via the hashtag #GradWalk2020. Facebook‘s social pages will also feature a film called Part of Us, in which grads will share excerpts of Marina Keegan’s “The Opposite of Loneliness” paired with imagery from their school experience. Instagram will also host a virtual standup comedy show featuring several creators.

Instagram celebrates Superlatives Day by having featured creators honor the best students with superlatives. The Brooklyn Museum and Instagram‘s @design will announce the winners of their #Your2020Portrait contest, with the five winners getting $5,000 grants and being featured in a virtual art show on the @design and @creators pages. The @creators page will feature several creators celebrating graduation and will also show “yearbooks on Instagram.” The @shop will feature a graduation gift guide from shoppable small businesses.

This will culminate in a big livestreaming event, which will feature a commencement address from Oprah Winfrey and remarks from the likes of Awkwafina, Simone Biles, and Lil Nas X. The rest of the event will include celebrity guest appearances in a diverse group that includes Gordon Ramsay, Selena Gomez, Cardi B, Cookie Monster, and most of the cast of This is Us. It’ll also include Miley Cyrus singing “The Climb,” which sounds designed to tickle the nostalgia of the graduates, since that song’s over ten years old and they would have all been children when they first heard it.

Given the world situation, it’ll obviously be difficult for most students to get the graduation of their dreams. There’s not much anyone can do about that. But this will be… something at the very least. If Facebook‘s lineup is not to your taste, YouTube is also having a virtual graduation ceremony on June 6, which will feature a commencement address from both Barack and Michelle Obama. The speakers in this lineup will include Malala Yousafzai, Sundar Pichai, Lady Gaga, and BTS.

Read next: Musk reopens Tesla factory against local rules: 'If anyone is arrested, I ask that it only be me'