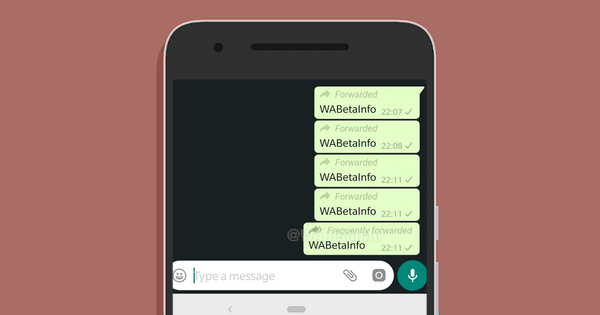 Earlier this month, WhatsApp rolled out a new feature to limit forwards to only one contact at a time. The idea was to reduce the spread of misinformation spread on the app amid the coronavirus crisis.

After announcing the feature, the company says this move has already had a positive impact on its service, in just two weeks. In a statement, WhatsApp said it saw a 70% reduction in the number of highly forwarded messages:

WhatsApp is committed to doing our part to tackle viral messages. We recently introduced a limit to sharing “highly forwarded messages” to just one chat. Since putting into place this new limit, globally there has been a 70% reduction in the number of highly forwarded messages sent on WhatsApp. This change is helping keep WhatsApp a place for personal and private conversations.

In 2018, WhatsApp first introduced a limit on the number of people you can send that message to in one go. In India, the limit was five people at a time at the launch, which was rolled out worldwide later. The company said this change brought down forwards by 25% at that time.

As the chats on the app are encrypted end-to-end, it’s hard to track how much impact these steps might have on the spread of misinformation worldwide. But it’ll expectedly discourage people to send suspicious messages to a bunch of folks in one go.