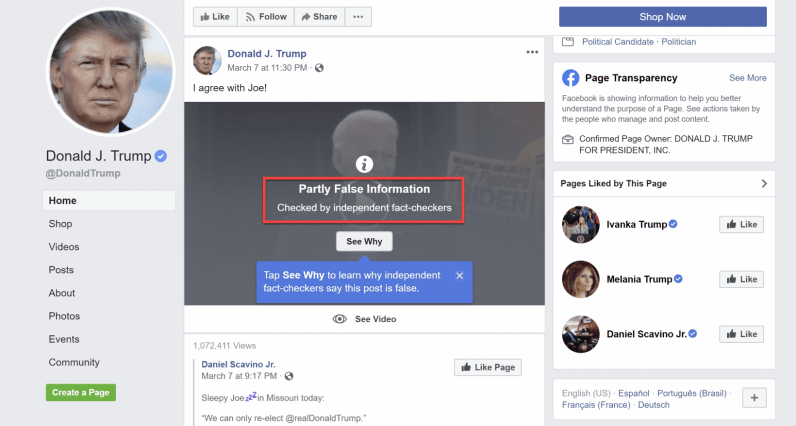 Twitter first used the ‘manipulated media’ label on an edited video of Joe Biden shared by White House social media director Dan Scavino and retweeted by Donald Trump. In the video, a Biden speech is edited to make it seem like he is saying “we can only re-elect Donald Trump.”

While no words were altered, the full sentence was “we can only re-elect Donald Trump if in fact we get engaged in this circular firing squad here.” Quite a different sentiment.

The same video has been making the rounds on Facebook, and the company has responded similarly. The video is displayed with a “partly false information” warning that shows before playing the video, noting that the video has been “checked by independent fact-checkers.”

You can then tap on “See Why” for more information on how the video was determined to include false information. When you click, Facebook opens a window saying the post contains “a mix of true and false statements or it could simply be incomplete. In some cases, the information is misleading.” It also lists a couple of organizations that have provided the correct information.

The company told CNBC it is “reducing [the video’s] distribution and showing warning labels with more context for people who see it, try to share it, or already have.” Indeed, when you click on the ‘Share’ button, you are met with a warning prompt saying:

“Independent fact-checkers at Lead Stories and AFP United States say this post has false information. To help stop the spread of false news, a notice will be added to your post if you decide to share this.

Pages and websites that repeatedly publish or share false news will see their overall distribution reduced and be restricted in other ways.”

You are then asked again to confirm you would like to share the footage. However, at the time of writing, the warning labels do not appear when embedding the videos on external sites.

All this being said, Twitter and Facebook are entering murky waters here, and they might incite less criticism with more nuanced labels. In Twitter‘s case, one could argue ‘misleading’ or ‘missing context’ describe the video more accurately than ‘manipulated.’ The latter might colloquially suggest more extensively doctored footage.

Indeed, this is how Scavino and others have defended the clip, stating that it was not ‘manipulated,’ but simply ‘shortened.’ Unfortunately, it does not take a stable genius to know that a video missing important context – such as you know, the rest of a sentence – is misleading. You needn’t tell a lie to spread disinformation.