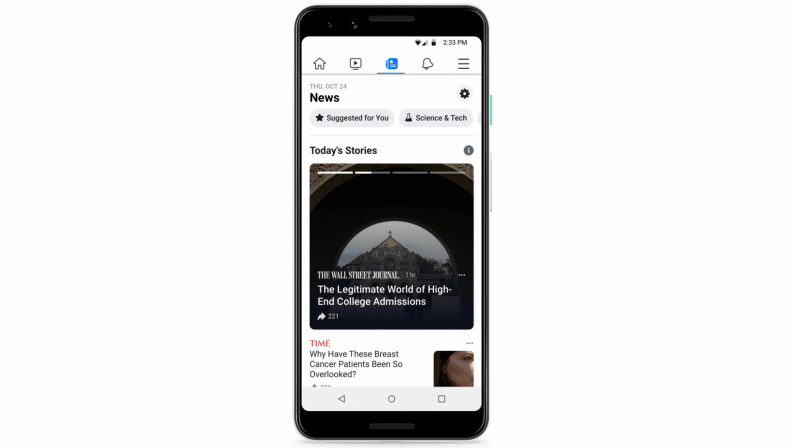 After deprioritizing news in the News Feed and pivoting to video, Facebook is officially back in the news business again.

The social media giant is rolling out Facebook News to select audiences in the US starting today, carving a dedicated home screen tab out of its digital real estate for users to explore their news interests directly within the Facebook app.

“Facebook News was built to bring people closer to the stories that affect their lives,” the company said. “We’ll continue to learn, listen and improve News as it rolls out more broadly.”

The company’s plans for a news service became concrete in CEO Mark Zuckerberg’s testimony before the US Congress, during which he labeled News as “a big initiative around news and journalism where we’re partnering with a lot of folks to build a new product that’s supporting high-quality journalism.”

This is materializing as a collaboration with a number of big publishers, including The Wall Street Journal, The New York Times, The Washington Post, Bloomberg, Business Insider, and BuzzFeed. It’s also paying a handful of them big money — $3 million a year for three-year deals, according to Vox — for making their journalism available to Facebook.

To that effect, the Menlo Park tech firm is embracing a mix of human and AI-driven approach to curating news in an attempt to fix the problems created by the News Feed, delineating the category from other kinds of content distributed on the platform.

A “diverse team of journalists” have been tasked with highlighting the biggest news stories of the day, while everything else will be hand-picked by a machine-learning algorithm that tailors to readers’ interests over time.

The company said as many as eight aspects — facts, diverse voices, original reporting, on-the-record sourcing, timeliness, depth and context, fairness, and local reporting — will be taken into account when choosing specific stories across a breadth of topics ranging from politics and world affairs to entertainment and science.

Facebook clearly understands the dangers of algorithmic curation for serving personalized news, for it acknowledges that machine learning has its limits. Still, the company expects algorithmic personalization to drive the majority of Facebook News.

But the company is not alone in venturing into news. Search goliath Google and iPhone maker Apple have their own news products, both of which offer a wide variety of stories from an array of publishers.

While Google News is completely free, Apple News comes with a Plus subscription that provides access to paywalled articles from dozens of news sources for $10 a month. It’s worth noting that both The New York Times and The Washington Post opted out of News+ after Apple asked for a 50 percent cut of all subscription revenue earned.

Facebook hasn’t disclosed the full list of news partners, but the inclusion of far-right outlet Breitbart as a “trusted” source is likely to raise eyebrows. And it certainly won’t be the last.

📰 Introducing Facebook News – a dedicated news tab starting to roll out today in the US pic.twitter.com/Mrkx6CGWaq

A question of trust

“We need the news to scrutinize the powerful, reliably document major events and uncover new truths,” Zuckerberg noted in a New York Times editorial. “This makes our society better, and I know from firsthand experience it has made our company better, too — even when it’s uncomfortable.”

In 2016, he famously asserted that the social network was “not a media company,” even after it became evident that nearly seven-in-ten people on Facebook got their news from the website.

That isn’t to say Facebook hasn’t made any overtures with news publishers in the past. It has, although none of it have worked well — neither for the company nor the publishers.

It started with Instant Articles in 2015, before it changed its mind by shifting to video the following year, and made an algorithmic tweak in early 2018 that reordered its News Feed to show more posts shared by friends and family and less from publishers.

Its foray into streaming content with Facebook Watch — in partnership with ABC News, CNN, and FOX News — has been tepid at best.

It also toyed with a separate human-moderated trending news section moderated by humans, which was discontinued after revelations in 2016 that the social network routinely suppressed stories from conservative sites, triggering a political backlash.

And let’s not forget that the last time Facebook decoupled news from its main feed, it not only led to traffic plummeting on news sites, but also resulted in “a steady rise in engagement on sites that publish fake or sensationalist news,” prompting Facebook to abort the test.

The dynamic, in the face of the company’s whimsical shifts in strategy to boost “meaningful interactions,” has been nothing but to the detriment of publishers, even as the algorithmic changes have left an outsized impact on their ability to earn digital ad revenue. The outlets that had banked heavily on Facebook were left biting the dust.

As much as publishers have been subjected to the constant updates and tweaks in order to keep users glued to Facebook, they’re still seemingly keen to work with it again in part due to the service’s colossal reach, which could translate into a huge audience.

Given Facebook’s spotty track record with distributing news on its platform, it’s too early to call its latest venture dead on arrival. But with the company compensating for high-quality journalism, it will be interesting to see how this experiment pans out in the long run.

At a time Facebook is facing a question of trust after a string of antitrust and misinformation debacles, its re-entry as a news aggregator should be seen for what it is: another ploy by the company to keep users locked into its ecosystem and not depart to its rivals like Snapchat and ByteDance-owned TikTok.

The only question that remains now is whether people are ready to get their daily news fix — even if that means taking the trouble to seek out reliable information by visiting a separate tab — from the Big F.

Read next: Hackers give Johannesburg government 3 days to pay over $30K in Bitcoin