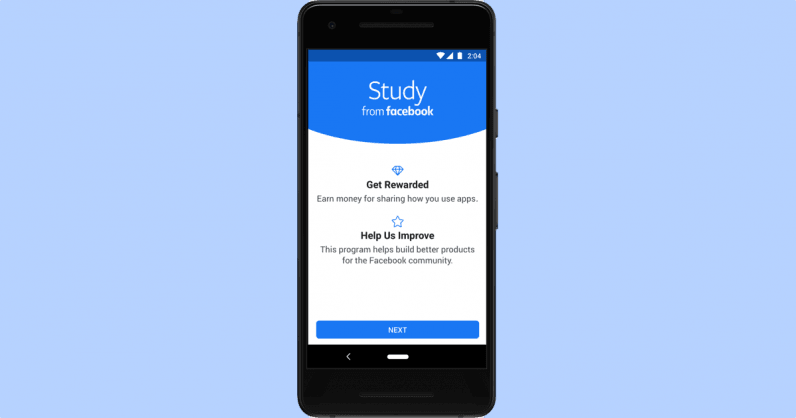 Remember when it was revealed in January that Facebook used to pay teens and gather mobile app usage data from them through an app? Well, the company shut that program down after a huge backlash, but the app’s sorta making a comeback. Facebook today announced a new app called Study, that will collect your data in exchange for cash.

The social network said it will use this data to “helps us learn which apps people value and how they’re used” and understand the community to improve its fleet of apps. It also likely hopes this is transparent enough to avoid getting the company in trouble. Last year, a slew of documents released by the UK parliament revealed that Facebook used its now-defunct VPN app, Onavo, to track competitors through data it collected from users.

The Android app is only meant for adults residing in the US and India. You’ll need to register for the program, after which Facebook will send you a link to its app on Google Play if you’re selected to participate. You’ll also have to have a PayPal account in order to receive payments.

Facebook said that with this program, it’s providing better transparency and security for your data:

We’ve learned that what people expect when they sign up to participate in market research has changed, and we’ve built this app to match those expectations. We’re offering transparency, compensating all participants, and keeping people’s information safe and secure.

Let’s talk about the most important thing: Data collection. Here’s what Facebook says it’ll collect from you:

Facebook said the app won’t collect user IDs, passwords, photos, videos, or messages. Plus, it’ll periodically remind users that they’re part of the data collection program, so they can change the permissions it uses, or opt out if they no longer wish to participate.

The company’s product manager, Sagee Ben-Zedeff, assured users that Facebook won’t sell any of the data to third parties, or use it for ad targeting. But, as we’ve seen numerous times, Facebook has been found leaking data several times in the past. So, unless security experts give this app the green signal, I wouldn’t recommend you install it – even if there’s real money to be earned from it.

Read next: The new Dropbox redesign turns the app into a productivity launchpad