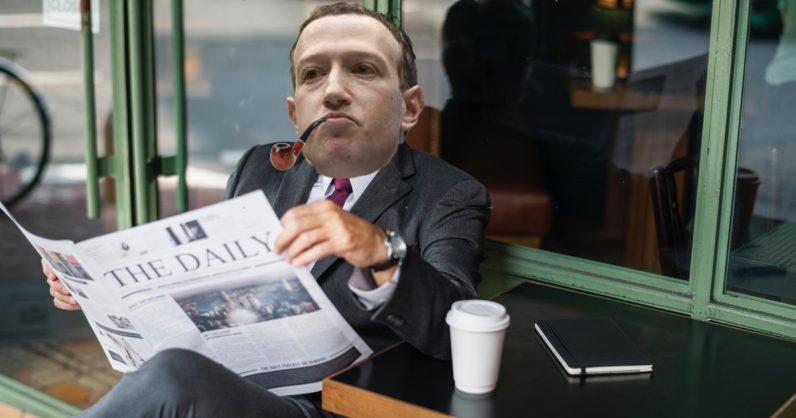 Facebook’s ready to give news distribution another go with a dedicated tab. In a conversation with Mathias Döpfner, CEO of Axel Springer, Mark Zuckerberg said that the company is thinking about introducing a news tab later this year.

As part of his yearly goal, the Facebook supremo had an hour-long conversation with Döpfner around news and journalism in the digital space. During the chat, he mentioned that he’s been thinking about how people who want to consume more news on Facebook can do so:

You know, in News Feed, primarily people come to the service to connect with friends, to get updates on people’s day to day lives. There’s a lot of news content in there because it’s so important. But there’s a lot of people who have a demand to want more news. One of the things that has worked over the last year or two is that we’ve launch this Watch product for video – a dedicated space for video. We’ve decided that there’s really an opportunity to do something like with news.

Zuck also added that the company wants to build the product in a consultative way, and not just by having discussions within the company.

While he didn’t mention paying publishers directly, he said this product will have “better opportunities for monetization” and the company can  “potentially have a direct relationship with publishers to make sure that their content is available, if it’s really high-quality content.”

This year I'm hosting a series of discussions about the future of technology and society. This time I sat down with Mathias Döpfner in Berlin. He started his career as a journalist and he's now the CEO of Axel Springer, the largest publisher in Europe. We talked about the role quality journalism plays in building informed communities and the principles Facebook should use for building a news tab to surface more high quality news, including the business model and ecosystem to support it. We also discussed the privacy-focused vision I laid out for the future of social networking and the four ideas for internet regulation I published this weekend. These are important topics and I could have spent hours talking to Mathias about them. It's important to me that we help people get trustworthy news and find solutions that help journalists around the world do their important work.

Let’s unpack this. First, the social network’s trying to build a new distribution system for news. Traditionally, Facebook’s model has been that publishers had their own pages, the company’s algorithm – based on factors like engagement – showed news pieces on people’s timelines. But that encouraged a lot of publishers to engage in clickbait and misleading headlines to increase visibility. It also launched instant articles in 2015 to let people read whole articles without leaving the Facebook app.

In 2014, Facebook decided to put some efforts towards killing clickbait by reducing the weight of likes; so publishers don’t use headlines that are geared towards generating likes. Two years later, it rolled out an update to reduce the number of pieces with misleading headlines appearing on people’s news feeds. In 2017, it said it’ll analyze individual posts to decrease the spread of clickbait.

A major change came last year, when it decided to show less content from brands and media houses on the news feed. Due to these changes, several publications who relied on Facebook for distribution saw a sharp decline in traffic. The impact was so severe that several publications had to lay off staff or close shop. Even if Facebook’s upcoming news tab helps publishers in getting more views, they’ll have to be careful not to rely on it heavily.

The new approach also signals a change in terms of possible payments to publishers in exchange for quality news. That might encourage media houses to publish authentic pieces of journalism rather than relying on stories that generate traffic.

There are a lot of hanging questions at the moment. How will Facebook rank news in the new tab? How can publishers get into the program? What kind of publications can get direct monetary benefits? What is “Quality news”? How will the platform keep out the fake news? Will it take more responsibility when things go wrong? Will it be able to shake off accusations of being biased against the right-wing groups? We hope the company addresses these questions before they launch the product.

While Zuckerberg said the company’s not in it for money, it has realized that there’s a massive opportunity for engagement with news. A study from Pew Research Center last year noted that 68 percent of Americans get their news from social media, and 43 percent people out of them get it from Facebook. So, a dedicated news tab might encourage more people to visit the social network for their daily information does. It’ll be an interesting second innings for Facebook in news distribution.

Read next: This tool judges your Twitter for subconscious gender bias