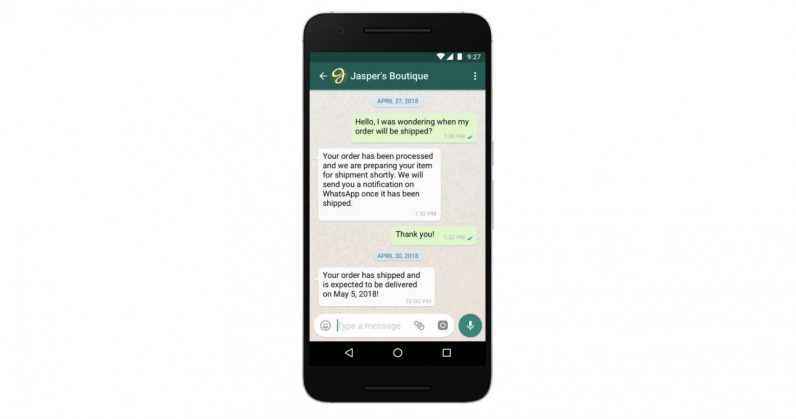 Before it was acquired by Facebook, WhatsApp used to display a banner in its app asking users to pay a nominal fee to use its messaging service after the first year. I’ve never paid that fee, and I don’t know anyone who has. But after nine years in existence, the company’s finally settled on a way to earn some cash.

WhatsApp is expanding its Business API that let companies communicate with their customers on the platform. They can now programmatically send users information like shipping confirmations and boarding passes, offer real-time customer support, and accept inquiries via a click-to-chat button on their site (similar to how Facebook’s Messenger plugin works).

Where’s the money at, you ask? WhatsApp says it’ll allow businesses to respond to customers at no charge for up to 24 hours; after that it’ll cost them a fixed rate per message, which will vary by country. The API can also plug into customer relationship management tools like Twilio and Zendesk.

That puts WhatsApp in a great position to grow its brand: it stands to earn money from businesses that are slow to respond to customers, and those fees also incentivize businesses to improve their support channels.

Plus, users may prefer WhatsApp over other modes of communicating with companies, like waiting on the phone to be connected to a sales rep, sending an email, or filling out a support request form on their site that doesn’t accommodate certain kinds of questions or requests.

The company initially launched an enterprise service app back in September 2017; it was free at the time, and was subsequently supplemented by an Android app that allowed businesses to create profiles for their companies and quickly reply to customers while on the go.

When that app launched in January, the company said it would initially be free to use, but that it’d charge for additional capabilities later on. Beyond the post-24 hours replies that businesses will have to pay for, WhatsApp could potentially charge for things like multiple service reps per company, or by the number of customers they connect with on the platform.

WhatsApp could also earn revenue by allowing businesses to receive payments through its platform. It’s been trialing this functionality in India for a while now thanks to the country’s robust UPI platform for instant money transfers, but still has a bunch of hurdles to overcome, the latest being a demand from the government for the company to set up a local office there before processing payments beyond the 1 million users it’s running its beta test with.

With that, WhatsApp can finally earn its keep for its owner, which paid $19 billion to acquire the service back in 2014. It’ll be interesting to see how it continues to grow its business, and whether it’ll eventually go the way of China’s WeChat to become a one-stop shop for a wide range of services.

Read next: JBL launches its $250 Google Assistant-powered Smart Display to take on Lenovo