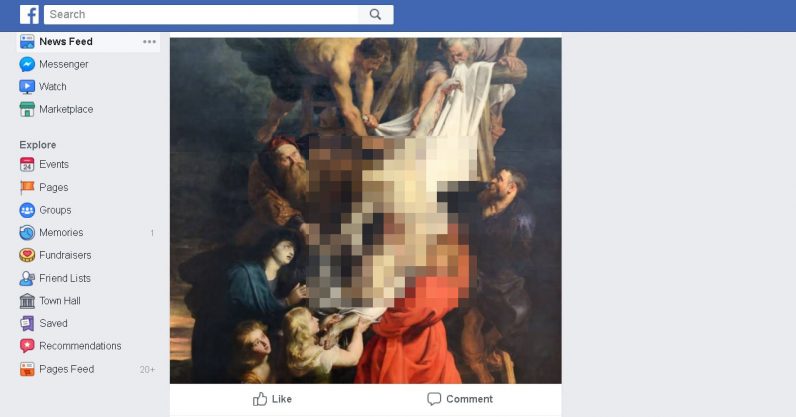 Facebook recently removed images from the site containing a partially nude person. The problem? The image was created 400 years ago.

There are some works of art so special and moving it feels like a cultural crime not to share them. Take, for example, “The Descent from the Cross” by Flemish master Peter Paul Rubens, which shows Jesus being lifted gently to the ground after his crucifixion. According to Artsy, the painting appeared in an ad campaign for Flanders alongside those of other Flemish artists.

Apparently such an image of tragedy, kindness, and dark beauty was altogether too much for Facebook. According to Belgium’s VRT News, the post showing this painting was removed because Jesus has the audacity to be wearing nothing but a loincloth.

The Flemish tourism board have been pushing back against that stricture, making a satirical video showing Flemish museum-goers being waylaid by guards who must protect them from nudity.

Multiple museums have also signed a letter to Mark Zuckerberg asking that he reconsider the company’s policy against nudity as “art brings people together, just like social media does.”

Whether this is genuine outrage or a ploy to capitalize on the attention to draw tourists to Flemish museums, I leave it to the readers to judge. I’m more interested in why Facebook won’t allow artistic nudity, or even partial nudity.

In case you need a primer, Facebook‘s ad policies have traditionally been rather confusing (not to mention pretty darned sexist). They prohibit “nudity or implied nudity, even if artistic or educational in nature, except for statues.” I’ve always wondered why statues get a pass, but not other pieces of classical artwork. Paintings are no more or less salacious than statues, and there are many paintings of enormous importance which show naked human flesh in one form or another.

Facebook‘s history with art is notoriously prickly. It’s removed a post featuring Gustave Courbet’s “Origin of the World,” along one showing the voluptuous Venus of Willendorf — the latter of which it apologized for, claiming the removal was a “mistake.”

Rubens’ nudes, especially the multiple pictures he painted of Jesus being lifted from the cross, aren’t exactly titillating or malicious. Surely if there’s any flexibility to be found in the rules based on cultural significance, the old masters can be grandfathered in.

We’ve contacted Facebook to see how it intends to respond to the Flemish tourism board, if at all.

Read next: Twitter to place new restrictions on its API to stop abuse